A Great Tool for Digging Potatoes

A Great Tool for Digging Potatoes

It’s a bit early to be thinking about digging potatoes—in my garden, they have just finished flowering and the spuds are not much bigger than marbles—but it’s not too early to think about buying a tool that I’ve found makes the task of digging by hand far easier than with a standard garden fork.

The tool is variously called a trash fork, or refuse fork, or trash hook. It’s what you’d get if you took a pitchfork and bent the tines at 90 degrees. I bought mine to pull quackgrass runners from loosened soil, and it does a nice job with that, but it turns out it’s even better for digging potatoes. 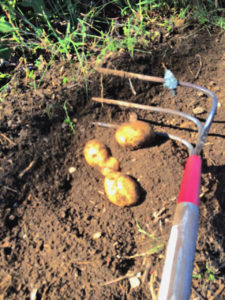 A trash fork can double as a potato fork

I have a BCS, and since I was planting about 700 feet of bed, I bought a potato digger for it. Unfortunately, the tool was a disappointment—it sliced or bruised lots of spuds while it moved through the bed. And even after the potatoes surfaced, I had to bend over to pick up every single one. So, I moved on to digging by hand. I started out digging from a standing position with a garden fork, but this is truly back-breaking work, with the constant bending and lifting. It was a big advance to get down on my knees, a position in which the digging is much easier and more ergonomic, and the potatoes can be more easily picked up.

But that still left me lifting lots of soil with the garden fork. And this is where the trash fork (let’s now call it a potato fork!) shows its merit. Instead of lifting the soil, the potato fork pulls through it, bringing the spuds along. The work is far easier, and the potato yield is higher, with far fewer damaged potatoes or left-behinds.

Here’s what I do: I mow the withered potato tops with the lawn mower and rake away the leaves I’ve used for mulch. Then I get down on my knees on one side of the bed and bring the tines of the potato fork down into the soil on the other side, far enough that I’m pretty sure to miss any potatoes. I pull the fork toward me through the soil, coming up slightly as I go along. Voila, spuds! I pick them up and put them in a bulb crate, which I drag along the row as I move down it.

Watch of video of the potato fork in action.

If the soil is really loose (as it usually is under the leaf mulch), I can do even less work, by turning the rake on its side and just rubbing back and forth across the bed, revealing and bringing up the potatoes with that gentle motion. I then turn the fork tine side down again for a final pull to reveal any that had grown deeper than I rubbed.

Using the potato fork last year gave me a better harvest than ever before: I got almost all of them, and I had very few damaged potatoes. As this year’s crop is sizing up, I am actually looking forward to the work of the harvest, down on my knees with a new favorite tool.