Starting a Farm in a Pandemic: Reflections from Winter Street Farm

Home/Newsletters/Starting a Farm in a Pandemic: Reflections from Winter Street Farm
Previous Next

Starting a Farm in a Pandemic: Reflections from Winter Street Farm

Nestled in the Upper Connecticut River Valley of New Hampshire, in former Pennacook and Sokoki lands, is a town called Claremont, which just got its first organic CSA farm.

Jonathan Hayden and Abby Clarke, a combined 13 years of farming experience between them, trained mostly on Massachusetts farms. But their common experience goes beyond farming, making them uniquely suited for any challenge. 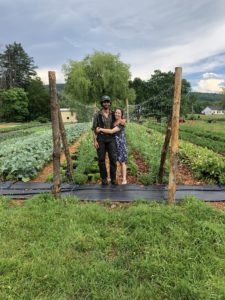 In the fall of 2019, they began the process of purchasing their 28-acre historic farm property while simultaneously preparing to leave to spend five months in Antarctica.  There they worked at separate camps providing logistical support for scientific expeditions. They slept in tents outside on the open ice, cleared snow and carried heavy loads from supply flights, and dealt with a range of logistical challenges in rugged terrain.

Originally from Falmouth, MA, Abby worked on and off at Simple Gifts Farm in Amherst Massachusetts over five years, eventually becoming Assistant Manager, while studying Natural Resource Conservation at UMass and occasionally leaving to sail the world crewing tall ships, work at a truck stop diner in Alaska while learning about dogsledding, and for a stint in Wyoming getting certified in wilderness emergency medicine.

Abby and Jonathan met at the 2016 NOFA Summer Conference. (Full disclosure: I introduced them there.) Abby and I farmed and lived together for many years at Simple Gifts Farm and were close friends. I had just recently met Jonathan at a NOFA Education Event at Astarte Farm in Hadley Mass on “No-Till Farming with Biochar.”

Strolling with Abby through the vendors tent between workshops, Jonathan recognized me from the No-Till Farming workshop and approached us. I quickly dropped some introductory details into the conversation as they shook hands—about Alaska, Antarctica, and their shared experience managing on similarly-sized organic vegetable farms.

Four years later, while farming together at a remote camp in the Yukon, Abby and Jonathan closed on the land that would become Winter Street Farm.

They had two weeks to fly back to New England and sign the paperwork. They closed at 10pm on the last business day before they left for Antarctica together, and spent the night in the house with the family from which they had just purchased the property.  They had just enough time to lay a quarter acre of silage tarps before packing their gear for the ice and leaving the continent. 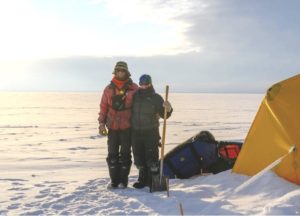 Abby and Jonathan outside of one of the tents they lived in on the ice.

In late February, the two returned to New Hampshire fully committed to making a CSA happen, with just three and a half months to build the farm and business from scratch.

Undaunted, the pair began. This is a partial list of what they needed to do:

Picked up all the tractors and equipment they were storing at various friends’ farms across Massachusetts; order, ship or pick up the equipment now yet owned; form a business; apply for grants, loans, and NRCS contracts; get organic certification; buy totes, building material, seeds, fertilizers and packing supplies, convert over an acre of sod into farmable soil; create a seeding and propagation room out of an old screened in porch; build a greenhouse off their farmhouse for seedling production; build a hardening-off mini-tunnel; order and build three caterpillar tunnels lay landscape fabric around the perimeter of their 1-acre main field and around each tunnel; build a walk-in cooler; build a wash station; get a new deep well drilled and a water sanitation system installed; set up a distribution area in their barn; paint the barn and put in a welcoming garden around the entrance; name the farm; contract with a graphic designer to make their logo; create a website; paint signs and put them up at the farm’s entrance and directing traffic around the farm; decide on a price, start and end date for the share and craft the marketing language; put out marketing materials to try to fill their CSA from a community where they had lived for only weeks; start seedlings and keep them alive; prep beds, source mulch, set up irrigation, rent a wood chipper and make woodchips; set up perimeter deer fencing; and, of course, accomplish all the spring seeding and transplanting.

A few weeks in, the first news of COVID in the US began to circulate. “There was some uncertainty in the early season, when we were completely invested in our business and were taking loans. We were afraid that we wouldn’t get enough CSA members and it was unclear whether there would be farmers markets this year.”

Yet the two pushed on, accomplishing every task on their list—incredibly—with a little help. Abby’s twin sister, a marine scientist, came to stay and work for several weeks, and two friends returning from overseas self-isolated on the farm while working safely outdoors.

Abby and Jonathan’s experiences had taught them to respond to the adversities of nature by keeping a level head, recrafting plans, and working even harder. Suddenly their winter work in Antarctica, which they rely on for their income, was uncertain. Jonathan began working part-time at the nearby Home Depot, working till 11pm several days each week.

Meanwhile, their concerns over the immediate finances of the farm were eased when “it became clear that local agriculture would be heavily supported [during the pandemic],” Abby explained. “CSA membership exceeded our expectations –we have 57 members now.” Like most new farms and food businesses, startup costs are significant, and Winter Street Farm will not produce a viable living for Abby and Jonathan for its few seasons. But rising CSA enrollment helped them whether the spring’s food supply-chain upheavals.

As their first crops approached harvest in late May, they adjusted their business and marketing plan. Jonathan explained, “we pulled back from other markets and instead expanded our CSA and did not open to the public as a walk-in farm stand. This really worked better for us anyway because the numbers are more uncertain with those markets.” Because of the unprecedented level of interest in CSAs in the spring of 2020, Winter Street Farm was able to increase their target membership level and focus on just that one sales outlet.

“We’re actually really lucky,” they explained.  “Because we hadn’t set yet up our systems, we just built them with coronavirus safety measures in mind.”

To ensure that the CSA would be safe for customers, they expanded their planned distribution hours and offered 3 pickup days, each with a 5 hour window: 3-8pm Tuesdays and Thursdays and 10am-3pm on Saturdays, which, they say, is more than enough for the number of members they have to navigate the distribution barn with physical distancing. “Everyone wears a mask, we have one entrance and one exit, and for our free-choice salad greens area, we have added a system for picking up a clean pair of tongs and placing them in a diluted cleaning solution on the other end of the bins—then we just periodically go through to rinse and reset them,” Abby explained. 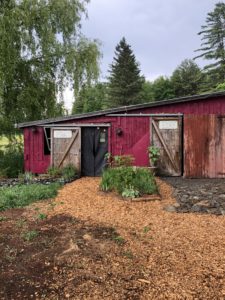 “The support that local farms have received has been really amazing, but it also reflects on the way that we need more community institutions,” Abby commented. “People are coming here and actually seeing and talking to each other—they feel more comfortable coming here than the grocery store, and it has a real community feeling.” Despite being transplants to the town and starting a brand new farm in its first few weeks of CSA distribution, the farm became an instant and essential part of the community. Already producing more than their CSA can consume, Winter Street Farm donates surplus produce each week to local hunger relief efforts.

“When you see the food chain falter and stumble and you can’t access the grocery store, you need other means for getting your needs met. I think a lot of people are just starting to discover buying local.” Asked whether he thought that people would continue to support local farms at the same levels after the pandemic becomes less dangerous, Jonathan pointed out that “if local sources produce good quality food, when they go back to grocery store they’ll be able to tell the difference. We already have people telling us that before our CSA, they went to Hannaford for their greens, which went bad in three days, but our greens last longer and taste so much better—this way is so much better.” 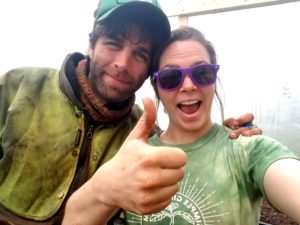 Looking for your future farm partner, or to make new farm friends? We can’t wait to be back in person, but for now we have the first-ever virtual NOFA Summer Conference!  There will be plenty of meetups and interactive panel discussions where you can virtually network. Register now at nofasummerconference.org