Do the Largest Garlic Cloves Make the Largest Heads? One NOFA/Mass Farmer’s Quest to Find Out

Home/Newsletters/Do the Largest Garlic Cloves Make the Largest Heads? One NOFA/Mass Farmer’s Quest to Find Out
Previous Next

Do the Largest Garlic Cloves Make the Largest Heads? One NOFA/Mass Farmer’s Quest to Find Out

Autumn is garlic planting season. If you save your own bulbs for planting (and I heartily recommend you do), you will need to decide what part of your crop to plant and what part to sell or eat or give away. The usual advice is to plant your very best—those giant heads with mammoth cloves, because, the advice goes, “the largest cloves makes the largest heads.” But those giant heads will also sell for the most money, and that made me wonder whether I could come out ahead if I planted my mediums instead. Would they do just as well?

This past season I tried an experiment to answer that question. I took 50 large, 50 medium, and 50 small cloves, and planted them in the same bed, with the same soil preparation, and the same irrigation. (As I’ve described before, I plant shallowly into several inches of compost, and cover with several inches of leaves, which makes for a fertile, no-weed bed that requires no digging at harvest time.)

I harvested them all on the 22nd of July, and prepped them all in the same way, stripping off enough outer leaves to give a clean head, and then cutting the stem at a hands’ width above the bulb. The length of the stem varied slightly from head to head, but I think with 50 of each type, those variations likely cancelled out.

Here’s what I found: 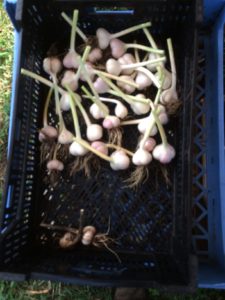 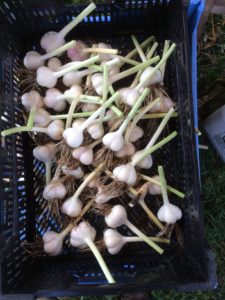 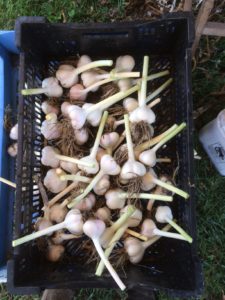 Within any one size, there was variation, but the pattern is clear, and not surprising: the largest cloves do indeed make the largest heads. Indeed, planting the larger cloves gave me 25% more harvestable garlic compared to the mediums. (And the mediums gave me a whopping 60% more than the smalls—from which I conclude that planting small cloves is a bad investment. Better to eat, sell, or give away than plant small cloves.)

At this point, I think most of us would conclude we should continue planting out our largest cloves, which typically come from our largest heads. It’s what I’ve been doing for years. But whether that earns me more money, versus selling them and only planting mediums, is a slightly different question.

Let’s say every head contains five cloves, and you can buy and sell garlic for $10/pound.

So, it would cost you an extra $4 to plant the large cloves. At harvest time, you would get 7.5 pounds from your mediums, worth $75, or 9.3 pounds from your larges, worth $93, an extra $18. To me, that sounds like a good investment I’ll be planting my largest cloves again this November!