Hen of the Woods

Home/Newsletters/Hen of the Woods
Previous Next

Hen of the Woods 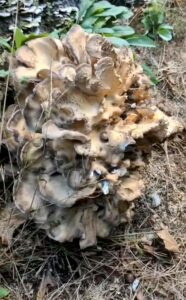 Our first foraged Hen of the Woods. Auburn, MA October 2021.

By Christy Bassett, Homesteader at Barefoot All Natural Farm

Earlier this month, we found our first Hen of the Woods mushroom. I had seen photos of people stumbling across them during walks in the woods, or heard of others suddenly noticing a giant fungal growth in their backyard and then wondering aloud what the heck it was. Like them, I felt a surge of excitement when I recognized the greyish brown fronds of this giant mushroom, but also a deep seated hesitation that my identification could be wrong and we were about to poison ourselves, mixed with a pang of guilt that we shouldn’t be taking quite so much from nature.

Luckily, with the popularity of posting these mushrooms on social media, experience with a community-led mushroom identification group and plenty of Googling, I had learned that this particular mushroom variety is fairly easy to identify and does not have any toxic look-alikes in the Northeastern US. I had also learned that the visible part of the mushroom that grows above ground is the fruiting body of a deeper-rooted mycelium, and that removing this upper portion does not inhibit the functionality of the organism or its ability to regrow next year. (Think of picking a tomato from a tomato plant.) From what I understand, it’s likely that the “root” fungus will fruit again in the same place for 5-7 years. So, with most of my fears alleviated, we harvested this beautiful specimen. 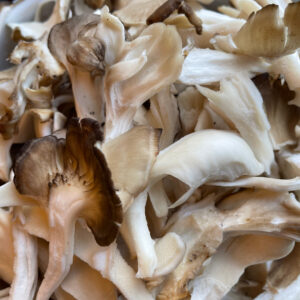 Cleaned and separated Hen of the Woods mushroom pieces.

Hen of the Woods is also known as Grifola frondosa, Maitake, Dancing Mushroom, Cloud Mushroom, Ram’s Head or Sheep’s Head. It is commonly found near the base of oak trees in late summer and early fall. The one that we found was large, with two smaller fruits near it. Sometimes you can find up to five fruits at the base of one tree, all living off of connections with the tree’s root system.

Once we decided that it was okay to harvest the mushroom and brought it home, the real adventure began. We used a dry brush to clean the soil and any other debris from the mushroom, and then stored it in the refrigerator in a reusable mesh shopping bag. It is important not to get the mushroom wet or seal it in an airtight container when it’s fresh, since humidity and condensation can turn the mushroom slimy and begin the decomposition process.

Of course we froze some of the mushroom whole and dried some of the pieces in the dehydrator for use in winter soups and stir fry’s. But with over 12 lbs. to process, we needed more ideas to preserve the bounty. Read on for some of the recipes that we settled on. 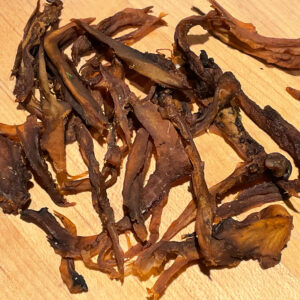 This marinated mushroom jerky is packed with flavor and travels well for snacks on the go. Just be careful not too eat too much at once- as the mushrooms rehydrate in your stomach you can feel overly full in no time at all.

Makes about 2 cups of finished jerky 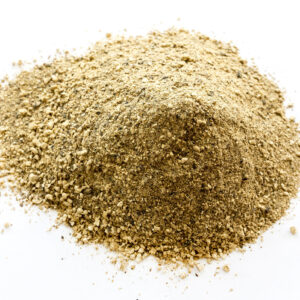 Umami is a category of taste in food that many of us are unfamiliar with. Besides sweet, sour, salty, and bitter, umami is the savory sensation that ties dishes together and adds “that little something extra”. Unfortunately the typical way to add umami to prepared dishes is to incorporate synthetic monosodium glutamate, or MSG. However, many mushrooms carry the umami flavor profile naturally and you can add “that little something extra” to your dishes by keeping a jar of mushroom powder handy.

Umami powder can also be used as a breadcrumb substitute, as a sauce or soup seasoning, or as a topical sprinkle to enhance flavor, like you would use salt or pepper on popcorn or your favorite meal. A little goes a long way, so use sparingly until you find your favorite ratio. 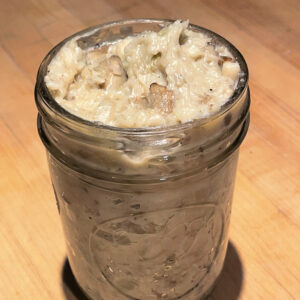 How many times have I wished I had a nutritious alternative to the commercial condensed cream of mushroom soup? So many times! This simple recipe can be made ahead of time and frozen, or whipped up in a flash for use in other recipes.

Makes about 2 cups of condensed soup base 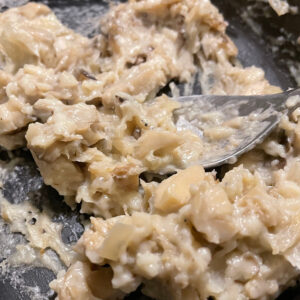 Have you found and/or harvested Hen of the Woods before? We’d love to see your photos and hear your foraging and preparing stories. Email christy@nofamass.org or post in the NOFA/Mass Community Facebook group to share your finds!

Here are some photos submitted by NOFA/Mass Community members.

Some beautiful shots from Hannah Traggis: 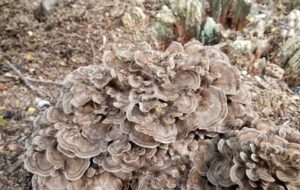 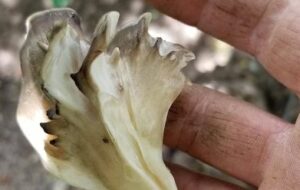 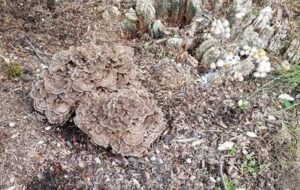 From John Duke, found in Enfield, NH on the base of a grandfather Oak: 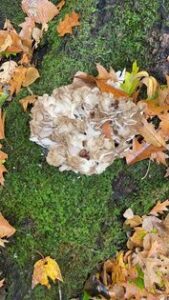 From Marj Bailey, found in Charlton, MA at the end of September 2021: 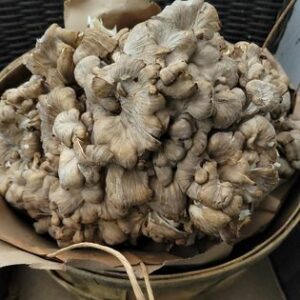 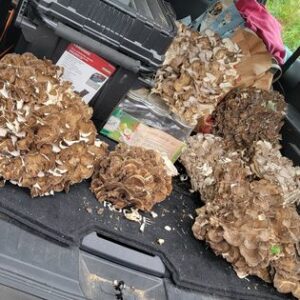 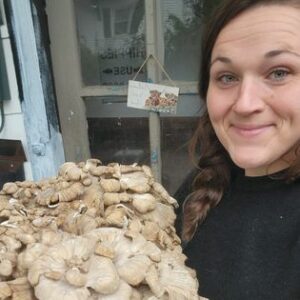