Several pieces of NOFA/Mass priority legislation were advanced in the Massachusetts Legislature ahead of the February 2nd committee deadline, including: Food Justice Frontline, Schoolchildren and Wildlife Protection, Protection from Chemical Trespass and the Raw Milk Delivery Bill! Read the good news about how YOUR voice is being heard and join us in thanking legislators.

Take Action on the Capital for Co-operatives Act (Federal)

Tell your Senators and Representatives (in the US Congress) that they can support food co-op start-up, growth & innovation! Ask them to support the “Capital for Cooperatives Act” in the House of Representatives.  (Details, here.)

Soil stewards provide a form of ecosystem service which is so critical to addressing the climate crisis. We are elated to see the legislature recognizing healthy soils as environmental infrastructure.

Thanks to your grassroots advocacy  – compelling testimony and emails from thousands calling for healthy food and living landscapes, several pieces of NOFA/Mass priority legislation were advanced in the Massachusetts Legislature ahead of the February 2nd committee deadline. We’d like to mark this success, thank our legislative champions, and then continue to push as the session heads toward its conclusion at the end of July 2022.

We are so grateful to the leaders of the Environment & Ag. Committee: Senate Chair Rebecca Rausch, Senate Vice Chair James Eldridge, House Chair Carolyn Dykema and House Vice Chair Mindy Domb – for hearing and responding to our concerns.

Click here to sign our open letter to the leaders of the Environment & Ag. Committee, thanking them for their efforts and encouraging them to push these bills to the floor for a final vote.

NOFA/Mass Priority Bills advancing to the next committee:

This bill provides funding to nonprofit organizations to hire individuals living in frontline, marginalized, and low-income communities for well-compensated food security jobs, offering efficient, effective solutions to meet local food security needs. This bill is a top priority of the Mass Renews Alliance, of which NOFA/Mass is an active part. (See a video about the bill from coalition leaders, here.)

H.926 would update the list of what pesticides can be applied on the outdoor grounds of schools, child care centers and school-age child care programs, limiting it to pesticides defined as minimum risk by the EPA or those approved for organic agriculture. The bill has garnered major endorsements including the Mass. Teachers Association and dozens of school committees, boards of health and community groups (see the full list, here).

“I was delighted to see the ENRA Committee endorse H.926 with a favorable report and I am encouraged by their decision to extend H.929, the consumer

ban on glyphosate. These bills would build on the Commission to Study Glyphosate which I got funded for the first time in the 2022 Budget. Together, they will make the residents of the Commonwealth healthier and safer from the risk that unsafe pesticides pose, especially to our children.” – Carmine Gentile, State Representative, 13th Middlesex (pictured, right)

This bill prohibits the application of agricultural pesticides within a one mile buffer zone around residences, medical facilities, schools, parks and playgrounds. It requires posted notice when pesticides are applied next to a buffer zone, requires a transparent complaint process and provides for penalties for violations, including suspension of pesticide applicator licenses and certifications.

“I’m thrilled to see an Act providing for protection from pesticide chemical trespass move from Committee. This legislation was driven by constituent input into policy that they felt would protect them from the harmful side effects of pesticide use, and it is rooted in the belief that innocent bystanders should not be the victims of dangerous pesticide use. Much like we have recognized second-hand smoke is dangerous, so too should we recognize that those who live near areas of excessive pesticide use are dealing with chemicals that cause both short and long-term adverse health effects.”

Recent deaths of bald eagles due to rat poison provide a tragic call to action. This bill requires the use of integrated pest management (IPM) plans on public lands and publicly-owned property and modernizes the state’s reporting system (currently analog) for pesticide use reporting and tracking.

UPDATE: On March 28th, 2022, the ENRA committee redrafted this bill so that it focuses solely on modernizing the state’s pesticide reporting system. While it’s disappointing to see the loss of a focus on promoting IPM, the bill as it stands would go a long way to improving pesticides regulations in Massachusetts.

“I will miss working with Chair Dykema as she was instrumental in propelling the Commonwealth forward with open eyes about the need for a critical review of contamination and disruption of natural mechanisms. The efforts of my legislative director, experience and insight of the many outside advocacy groups, including NOFA, and the availability of talented committee staff deserve credit for this successful report. We will continue our commitment to drive this important piece of legislation to the finish line, and hope to create awareness about the detriment of wildlife when we are not careful, and be an example of positive change” – Jim Hawkins, State Representative (pictured right)

Under this bill, raw milk farmers would be allowed to deliver milk, including by third party delivery, directly to a contracted consumer off-site from the farm, through a CSA, at a farm stand, to a residence, or to an established, non-retail receiving site. If delivered to a retail establishment, it would be accessible only to the directly contracted customers.

Unfortunately, one NOFA/Mass priority bill was “sent to study,” meaning that it will not be taken up for a vote this session:

S.556/H.937, An Act providing for the public health by establishing an ecologically based mosquito management program in the Commonwealth. (Sent to “study.”)

The Environment & Ag. Committee alone had over 700 bills to consider this session. We are grateful that they provided a favorable report on several of our priority bills. We will now rely on the continued support of committee leaders, as well as the original bill authors, in shepherding these bills through the rest of the legislative process.

Join us in sending a thank you to committee leaders and please also send a personal email to your own state legislators, thanking them and informing them of the bills that are moving, letting them know we’ll need their continued support.

While we were disappointed to see the mosquito reform bill (S.556/H.937) stall in the legislative process, it has very much fulfilled its primary purpose of influencing the draft recommendations of the Mosquito Control Task Force (MCTF), released on February 3rd, 2022, which actually contain many of the provisions outlined in the coalition bill. The MASSQuito Coalition is now organizing around the comment period for the Task Force (listening session on February 10th, written comments due February 14th, details here) and hopes that coalition-supported provisions for ecological mosquito disease management will be incorporated into the final plan.

More generally, we are encouraged and grateful to see pesticide reform legislation garner increasing degrees of endorsement and support among legislators. This is due, in no small part, to our grassroots advocacy and educating of lawmakers. We have cultivated legislative leaders who are willing to engage the regulatory process on our behalf, regardless of whether an individual bill makes it through the whole process. Final passage of a bill is not the only avenue toward meaningful change.

Thank you for being a part of this ongoing, long term process to influence pesticide regulation in our Commonwealth, to promote healthy living landscapes and increase access to healthy, nutrient-dense food. Our work continues! (Stay tuned…) 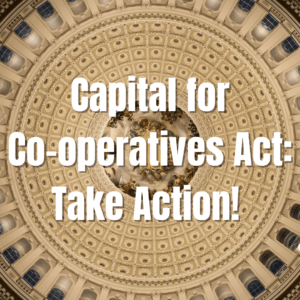 Take Action on the Capital for Co-operatives Act (Federal)

Tell your Senators and Representatives (in the US Congress) that they can support food co-op start-up, growth & innovation! Ask them to support the “Capital for Cooperatives Act” in the House of Representatives.

This legislation would require the U.S. Small Business Administration (SBA) to change their existing regulations so that co-operative enterprises can access the agency’s affordable financing programs to help small businesses start-up, expand and innovate. Specifically, the bill would ensure the changes do not require a personal or entity guarantee from the co-operative. 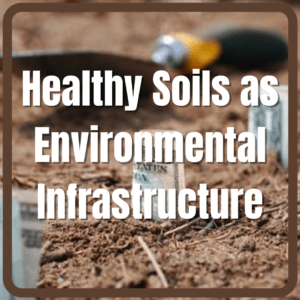 Healthy Soils Classified as Environmental Infrastructure by the State Legislature

In December 2021, legislators approved an historic $4 billion COVID-19 relief spending package (ARPA), which will invest $100 million dollars in environmental infrastructure – and it included healthy soils in their definition of environmental infrastructure! Legislators are thus recognizing the crucial role that farmers and the lands they steward play in mitigating threats from climate destabilization (See the December 2021 Press Release from AFT, here).

On February 8th, 2022, American Farmland Trust and NOFA/Mass submitted a letter, signed by 57 other advocacy organizations and farms to the Secretary of the Executive Office of Energy and Environmental Affairs, requesting that $2 million of the $100 million in APRA money be allocated specifically to healthy soils programs.

Thanks for reading this month’s NOFA/Mass Policy Newsletter. If you are not already subscribed to receive this newsletter via email, you can sign up here.