Home/Newsletters/Sugarin’ on the Homestead
Previous Next

Sugarin’ on the Homestead*
*Originally written and shared in the February 2012 issue of the NOFA/Mass newsletter. Revised and reprinted February 2022. 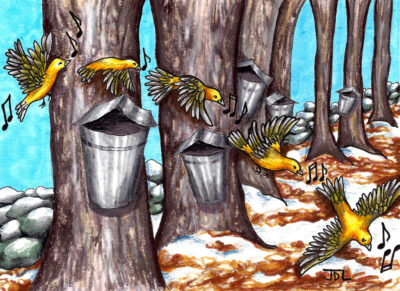 The optimist in me is sitting here thinking of spring while trying to keep warm. My vegetable seeds have arrived to join those I’ve saved; my Bulk Order has been submitted; my seed/transplant calendar has been developed; and our garden plot plans have been created. Now is a waiting time until my fingers can dig into the soil. However, the daylight is lengthening and today the sky is that particular blue that lets us know change will come, and with it the next big project on our homestead horizon: sugarin’.

When to tap is not a cut and dry date, it’s more of a feeling; it’s when I feel the blood running in my veins, the days are longer, there’s more light and I have the urge to get out and start growing vegetables. Well, if I’m feeling the blood rushing through me then I know it’s a sure sign of spring, and so do the sugar maples.

We are lucky enough to have a few sugar maples on our farm, and we tap out between zero and nine trees a year. On a good year seven to nine taps will give us around three gallons of syrup. The more common red maple can also be tapped, but the sugar content of the sap is lower, thus you’ll have to use more sap to produce your syrup. (For future reference, keep track of which trees have the sweetest sap.)

You don’t need a lot of equipment, just a strong back, a tap, a drill, a bucket, a stainless steel cooking pan, and a heat source. You can buy taps at your local farmer’s supply store. We use food grade plastic buckets to collect the sap and to carry it to the house. Somewhere along the line I inherited a large rectangular stainless steel pan, which perfectly fits on our wood cookstove and serves as an evaporator. Any pot with a large opening, which allows evaporation, will work. Most people who make a lot of syrup want to do it outdoors to keep moisture out of the house. But for small amounts, we’ve always done it in the house to no ill effect, and we’re using the same wood that’s heating the house.

Sometime from mid February to mid March, depending on the weather, is the time to set your taps. When the days are warm, the sap runs from the roots, up the tree trunk to the branches and the buds. When the temperature drops for the night, the sap runs back down to the roots, thus giving two opportunities per day for the sap to run into your bucket. When these conditions are in place, take your trusty drill out to the tree. Only choose a healthy tree to tap, one that is more than 10” in diameter at your chest height.

Next, using a sharp bit (to increase flow and decrease tree damage), drill the appropriate size hole for your specific tap at a slightly upward angle, insert the tap into the hole, tap lightly to seat it, and attach the bucket to catch the drips. Hearing the ker-plinks is exciting!

Monitor the flow. On a really sunny day you can get a lot of sap, and you don’t want to have your bucket overflowing. Keep the sap cold until you are ready to boil it, as it can turn sour. We keep it outdoors with snow piled around the buckets. It takes approximately 40 gallons of sap to make 1 gallon of syrup. That’s a lot of sap and a lot of hauling, so that’s where the strong back comes in.

We pour the sap through a sieve to remove any stray bark and bugs; moths especially like to drown in the sap. Then place the pan on the heat to boil merrily away until it evaporates down to syrup consistency. Be careful not to overfill the pot because if it boils over it’s a mess. We keep adding fresh sap regularly so we’ll end the day with a larger amount of syrup. Being that we are using the cook stove, we’ll have several pots of sap preheating to add to the main pot as needed. Adding a tad of butter will bring it back under control if it gets too foamy. Be mindful as it nears the end of boil, as it can go from syrup to sugar quite quickly. You can drip some onto a chilled plate to help determine consistency or use a hydrometer to determine when it has reached 66-67% sugar content. While still hot, pour into sterile glass jars, leaving a ¼ inch air space, seal and let cool. Store in a cool dark place.

When the flow of sap from the trees slows, it’s time to thank the trees again and gently remove the taps. The hole in a healthy tree will heal over, thus decreasing the likelihood of the tree becoming diseased. It’s also good to clean all of your equipment and store for the next use, since it quickly gets moldy and is much harder to clean and disinfect once that happens.

For continued tree health, here are a few more guidelines:

It’s great to have your own homemade maple syrup on pancakes. We use it for almost all our baking needs and it makes a great gift. Don’t be daunted by the sounds of it, as sugarin’ really is fairly simple, a way to get spring exercise and a great way to sweeten up your life! No maple trees? Ask a neighbor or look for them lining older roads. (Just ask permission and gift a jar later.)

Oh, I almost forgot the other best part– drinking some sap fresh from the tree. Can’t be beat. The kids love it too. It’s a great spring elixir.

An account of the art and history of sugaring. Practical details for modern sugaring and remarks on pioneering in the 20th century.

Recording from the 2020 NOFA Summer Conference. How to start a small, organic maple syrup making operation at your home, or on your homestead or farm.