Home/Newsletters/Kombucha, a Love Story
Previous Next

Listen to a recording of this article by the author

Since I started brewing kombucha over three years ago, what began as a simple project in my mom’s kitchen has become an odyssey of exploration and discovery; part culinary art, part philosophical practice, part never-ending science fair experiment. For all the ways to describe this journey, though, only one of them really seems true. For me, kombucha is a love story. 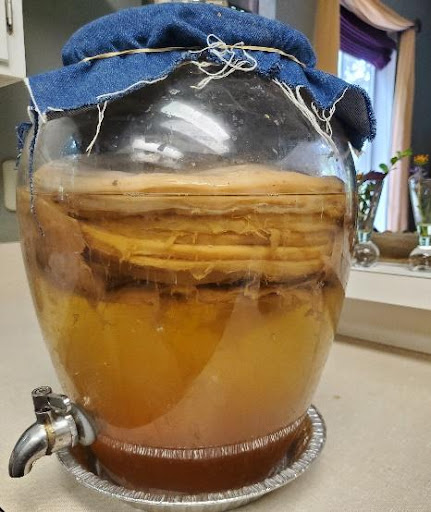 Kombucha fermenting on the counter.

Kombucha is a tangy, effervescent, predominantly non-alcoholic beverage produced by the fermentation of sweetened green or black tea. This process is facilitated by a SCOBY—or “symbiotic culture of bacteria and yeast”—a colony of probiotics including saccharomyces, lactobacillus, and acetobacter. An ancient practice most likely traced to pre-Common Era China, kombucha brewing became a subject of scientific research during the twentieth century, and the drink has enjoyed a meteoric rise in popularity since the early two thousands as probiotic, health drink, and substitute for sodas or beer.

It is important to acknowledge that kombucha does not treat or “cure” any disease. Supposedly known as the “Tea of Immortality” in the Qin Dynasty, however, it nonetheless boasts a variety of its own virtues, as well as offering an alternative to other, less salubrious beverages. First, kombucha incorporates black or green teas as one of its three primary ingredients, and thus confers many of their well-known benefits. As a source of flavonoids, flavanols, antioxidants, polyphenols, and the amino acid theanine, for example, tea can help decrease LDL cholesterol and inhibit blood clotting, as well as lower blood pressure, fight inflammation, and support the immune system. Present research seems to indicate that black or green teas offer a protective effect against several health conditions, especially esophageal and gastrointestinal cancers, as well as its beneficial antibacterial and antimicrobial activity.

Second, kombucha—like yogurt, sauerkraut, tempeh, kimchi, pickles, and other foods—is a product of fermentation, a food preparation process that can increase vitamin and protein synthesis and nutrient absorption. Its properties as a probiotic—or potential source of bacteria beneficial to the gut microbiome—and promoter of gut acidity, likewise ease digestion and nutrient absorption. Thus, kombucha can also help the body better utilize other foods consumed.

Third, the original kombucha brew can be flavored with many additional ingredients, which confer their unique virtues, as well as give each bottle its own, distinctive flavor. Ginger, an ingredient in many flavors, for example, is a source of antioxidants, supports digestion, and has long been used in Eastern medicine practices. Lavender, likewise, is an adaptogen which activates the parasympathetic nervous system, promoting bodily functions associated with rest, repair, and digestion. When flavored with a variety of berries, fruits, and herbs, kombucha can also incorporate their respective anti-inflammatory, antioxidant, or medicinal properties.

“Y’all, uh…like this stuff, huh?” Before I began brewing myself, my dad and I would go to a nearby grocery store on Friday afternoons for a kombucha, and received this question when many a skeptical cashier glanced askance at our bottles of brew. Iconically captured by the 2019 “Kombucha Girl” meme, many people’s first tastes are ambivalent—and as much as I love kombucha, I also harbor no illusions; the pond scum-looking chunks floating in the bottle can be a turn-off. 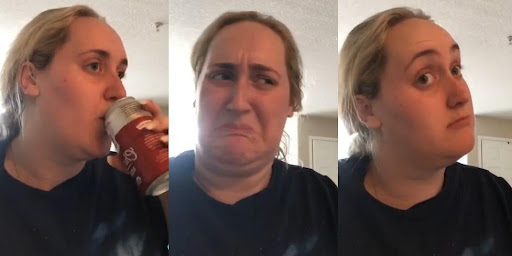 “Kombucha Girl” Brittany Tomlinson reacts to her first sip of kombucha in the iconic and widely recaptioned 2019 meme.

In the next two articles of this series, I will cover the basic procedure and share my own insights for getting started as a home kombucha brewer. Ultimately an enthusiast before anything else, however, I believe the first and most important step is always to acquire a genuine taste for the brew itself—and that this conversion is possible, even for those whose first sips are something less than revelatory. In my experience, Kevita and GT’s Synergy are the commercial brands most widely available in stores, and both—particularly Kevita’s fruit flavors—can be good “gateway kombucha” for more hesitant or first-time drinkers. Others recommend diluting kombucha with water, juice, soda, or serving it over ice as ways of introducing themselves or others to the taste.

As a source of probiotics, antioxidants, anti-inflammatory properties, digestive aid, and as an alternative to other beverages, clearly there are no shortage of reasons to consider trying kombucha for the first time, or to persist beyond the initial missteps and disappointments inherent in learning to brew. However, I believe the true value of drinking kombucha—and especially brewing and sharing your own—cannot be confined to the physical act alone. It is an opportunity to be generous toward others, care for yourself, and collaborate with an organism that is, at first, alien in appearance, but also gradually recognizable as a fellow living thing—dynamic, kindred, and sentient.

My SCOBY’S name is Toby. We’ve been together for almost three years, not always seeing eye to eye—or lack thereof. Whenever I handle the SCOBY, share a bottle of kombucha with a loved one, or try a new brew for the first time, I feel the close press of the universe and an expansive, tender sisterliness toward all living things—my companion, my SCOBY, and myself all united in a single tangle of stardust, mitosis, and thirst. Like I said, for me kombucha is a love story.

Read part 2 of this series here

Read part 3 of this series here 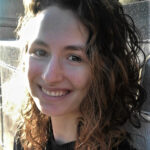 Ophelia Jackson is a student at Oberlin College and grew up in Tallahassee, Florida. She is an artist, writer, gardener, and home kombucha brewer.