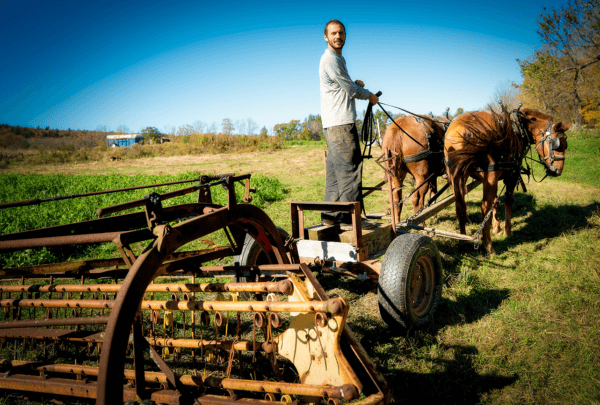 Sawyer Farm is located in the Hilltowns of Western Massachusetts. We’ve been farming here since 2010. In the early years, an aggressive regime of cover cropping and applications of homemade compost helped build up our soil health. However, the whole farm is on a slope, and, while contoured beds reduced erosion, they didn’t eliminate it. In particular, increasingly intense rain events in the fall (the tail end of hurricanes moving up the coast) were causing visible erosion. These rains were coming in the critical period when fall cover crops were getting established and didn’t provide full soil protection. Still, our cover cropping and manure applications seemed to compensate and soil health improved year over year until 2015 or thereabouts, when we reached a plateau in crop yields and soil health.

It took us a while to reach the obvious conclusion: the frequency and intensity of our tillage was causing systemic damage and the cover crops and compost were just our annual apology for the damage we’d done.

Still, recognizing the impacts of tillage and actually moving towards tillage reduction are two different things. We manage five acres of vegetables, mostly storage crops with a relatively low price per pound. Five acres is tiny in the scheme of things, but enough that many small-scale, no-till systems seemed impractical for us in terms of labor or materials. (I’ll spare you the full story, but we’ve experimented with tarps, transferred mulch, and crimped rye with limited success.) 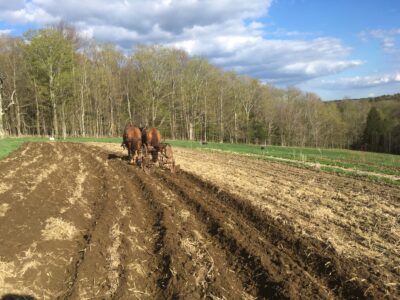 The horses in the middle of shaping beds in a field of winter-killed oats and peas. I bet when I took this picture I was feeling pretty proud of myself — I’d gotten a good cover established the previous fall and I had disced minimally before bed shaping. Note that the beds follow the contour for minimizing erosion. The residue on the surface would have helped too. This was probably going to be planted to onions and early brassicas. Photo credit: Lincoln Fishman

We settled for a partial solution. We tilled in the spring, got our crops established, and then broadcast Dutch White clover into standing cash crops in July, after the last cultivation or once weeds were fairly well controlled. This clover would provide 100% soil cover by late August, in time to protect the soil from fall rains. The clover would overwinter and was easy to plow or disc down the following spring. From a management perspective, this system works well–it is low labor, requires no new equipment, offers a variety of soil health benefits, and seems to have no negative impact on cash crop yields as a function of crop-clover competition. Though Dutch White clover doesn’t produce as much biomass or reach down as deep as many other cover crops, it is, in our experience, much easier to manage on a farm growing a diversity of crops, because it requires much less planning than other covers we’ve used.

A word about Dutch White clover. This is the type of clover that you see in lawns or overgrazed pasture. It is low-growing, rarely reaching over 8″. While other types of clover can work undersown with certain crops (e.g. red clover under corn) Dutch White, because it is so short, offers much less competition and requires little to no mowing. It spreads aggressively through stolons, so it is very effective at suppressing weeds.

After a number of years of undersowing Dutch White clover and plowing it down in the spring, we asked ourselves what, in retrospect, seems like an obvious question: would it be possible to grow vegetables directly in the clover? We doubted it–it seemed like the clover would provide too much competition for a little transplant, but we began doing research and found some university studies looking at transplanted vegetables or direct-seeded field corn in perennial clover with exciting but mixed results. What we didn’t find was any growers using the system.

Spoiler alert! It is possible! In the next newsletter, we’ll describe our experiments and the system we’re currently using to do just that. Meanwhile, NOFA/Mass has some additional guidance on using cover crops to manage for soil health. 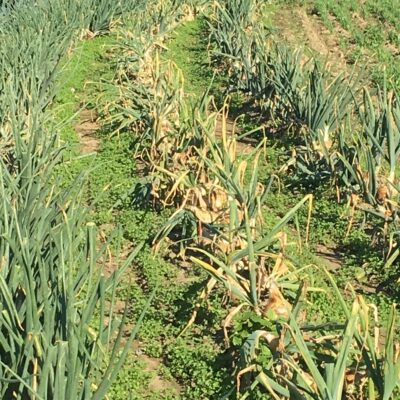 Clover sown under onions. With horses, most everything was grown in a single row, with rows 36″ apart. Photo credit: Lincoln Fishman.

As Lincoln outlined, cover cropping plays an important role in building and maintaining soil carbon content and improving health of your soils. Adding a cover crop to your production can increase the availability of nutrients, including nitrogen, increase water infiltration, decrease erosion of soil and amendments, and support more soil biology, ranging from beneficial microbes to earthworms and insects, to help your cash crops thrive. Cover crops can build soil organic matter, which is essential to help crops thrive by allowing crop roots to grow deeper, more water to be held in the soil (critical for droughty years such as this past summer), better rain infiltration (helpful for super rainy years such as last year or during heavy rain events), and reducing compaction. The type of cover crop you choose depends upon your goals, including cash crop production and timing, desired benefits from cover crops, termination strategy, and any other existing pest-related factors, such as weeds or diseases. Like people, some cover crops are better suited in some roles than others. If you’re new to cover cropping or want to learn more to optimize the cover crops you utilize, New Hampshire’s Natural Resource Conservation Service (NRCS) has developed a Cover Crop Planting Specification Guide that can be applicable for farmers in Massachusetts.

Some exciting aspects of introducing cover cropping or incorporating other soil health-focused management practices are the experimentation/trial and error efforts, as Lincoln described, and visualizing changes in soil health, crop growth, production, and pest incidence over time. The Soil Technical Assistance program at NOFA/Mass uses its soil health assessments and carbon proxy testing to quantitatively and qualitatively assess current condition and, with serial testing over many years, soil health changes over time. Doing so offers an interesting way to know how the management you’ve implemented on your farm is benefitting your soil, and to learn ways to make further improvements. Last year, NOFA/Mass closed out a USDA-funded Conservation Innovation Grant (CIG) project that evaluated soil health at 9 farms in the Northeast over a 3-year period. Currently, we’re working to increase farmer awareness of the value of soil carbon proxy testing, and the relationship between farm management and soil health, through a Sustainable Agriculture Research and Education (SARE) grant. As a part of the SARE project, NOFA/Mass has been performing soil carbon proxy tests each year on farms throughout Massachusetts, and repeating tests every year on 3 farms in Massachusetts, Connecticut, and New York, to further monitor soil health changes over time in response to management.

Learn more about our soil health testing and Lincoln’s cover cropping experimentation and system development in next month’s newsletter!

Read part 2 of this series here.