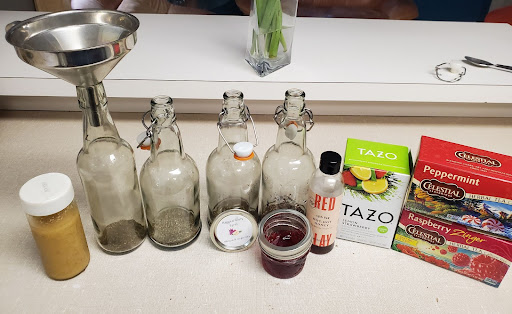 At once teeming and leisurely, summer is a sprawling season—a time for both quiescence and wandering, retreat and expansion. Feet are loosed from shoes, vines overreach their trellises, days are freed from the regimens of the classroom; in childhood, it is the part of the year in which it seems anything might happen, and even as adults, summer often retains some of this abundance of possibility. If the ample sunlight and rambling twilights call many to travel, they can also invite us to venture out in other ways as well, shifting our routines or exploring new practices. Because warmer temperatures also hasten the fermentation process—and sweeten the savor of a cool libation—there is no better time of year to begin brewing kombucha. As the season comes to a close, moreover, this series will discuss the final stage of preparation, the second fermentation.

Many brewers sample, enjoy, or even serve “the raw,” or unflavored brew, and kombucha can develop a satisfying flavor and subtle effervescence after the first fermentation alone. The second fermentation, or bottle-aging stage, is the most creative stage of the process, however, offering the opportunity to create individual flavors, and see the brew’s characteristic carbonation fully develop.

Kombucha is ready to bottle age when it develops a vinegary aroma, when bubbles appear after pouring, when the color of the brew shifts from dark to light gold and, most importantly, when the flavor has reached the desired balance between sour and sweet. Thus, “maturity” is less an objective state than a subjective, personal judgment. Likewise, bottle aging is a fairly flexible and forgiving process, allowing brewers to accommodate both slightly over-sour and not-quite-ready brews.

The second fermentation can only take place in an anaerobic environment, and therefore requires bottles with an airtight seal; recycled, store-bought kombucha bottles with the lids screwed back on won’t suffice. I recommend swing-top lids and have used a set purchased at https://fermentaholics.com/product/kombucha-bottling-kit/ for several years now.

Like the first fermentation, the second fermentation also requires a sweetener to catalyze the process and produce carbonation. There are a variety of options, including: sugar, honey, syrups, dried fruit, fruit juice, jams, and jellies. The maturity and flavor of the raw kombucha in the vessel determines the appropriate amount of sweetener to add to each bottle. If you would like to bottle age fairly early in the first fermentation while the brew is still sweet, it may not be necessary to add much additional sweetener. Conversely, if the kombucha has already turned quite sour, it’s possible to rebalance the flavor by sweetening the bottles more liberally.

As a general rule of thumb for 16 oz bottles of kombucha, try adding:

Note: I haven’t had much success with fresh fruit as a sweetener, since it often imparts a weak flavor, fails to catalyze the carbonation process, and fills up a lot of space in the bottle. (Pineapple is one exception to this, producing a pleasant tangy flavor and fizzy brew.) If you do use either fresh or dried fruit, I recommend finely chopping, or ideally blending, them to increase the surface area and therefore the flavor imparted.

To bottle age, it is sufficient to simply combine a secondary sweetener with the mature kombucha in a bottle and allow time for the second fermentation to occur. Adding additional flavoring agents can increase carbonation, as well as create unique, more complex flavors. These agents include teas, ginger, herbs, spices, and citrus juice or zest. Unlike in the first fermentation, it is fine to use herbal teas, since they will be in the bottle, rather than directly in contact with the SCOBY. (See the Recipes section below for inspiration.)

Note: If using tea bags, I tear them open and empty the leaves directly into the bottles. Ginger is also an excellent additional flavoring agent, but grating a large amount can become a bit laborious. To prepare enough for multiple bottles, I blend it in a single-serving smoothie maker with a little raw kombucha. Any surplus puree can be kept in the refrigerator for future bottlings. Both ginger and mint tea increase carbonation levels in bottles.

5. Funnel
A funnel is very helpful for transferring flavoring agents and sweeteners into bottles. Ideally, its neck should be slightly smaller than the neck of the bottles so that it can be easily inserted.

To remove the dregs of flavoring agents from kombucha when serving, pour it from the bottle into a glass through a sieve. 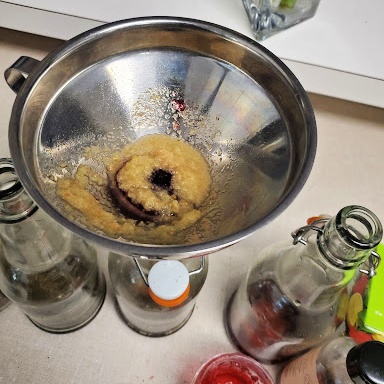 Combining favorite ingredients and designing your own flavors is one of the most enjoyable parts of the kombucha brewing process. Experiment and get creative! Below are a few of my favorite recipes for inspiration. 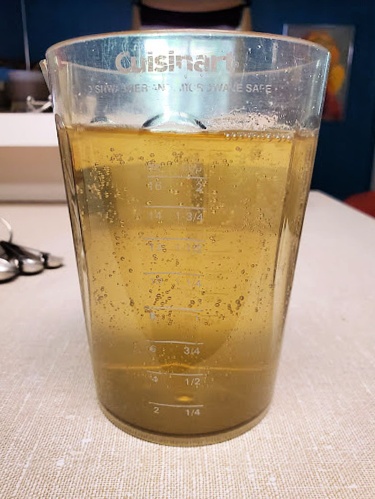 Read part 1 of this series here

Read part 2 of this series here