Home/Newsletters/Pepo, Maxima, and Moschata: Know your Cucurbits!
Previous Next

When you choose your winter squash, pay attention to the species. Some are easier to grow than others!

As I write this in May of 2021, I am roasting the last of my 2020 crop of butternut squash, harvested in September. Even after eight months in cool but unregulated basement storage, they are as sweet and richly flavored as ever. I just love this squash.

There are other great winter squashes, including buttercups (probably the best tasting of all), acorns, delicatas, and a wide variety of less well-known types. Despite their similarities, winter squashes are in fact separated into three main species, and knowing the species will help you choose the best variety for your needs. 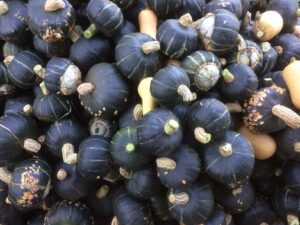 All the squashes (including summer squashes) are in the Cucurbita genus, which also includes pumpkins and some gourds. The main species of cucurbits are pepo, maxima, and moschata:

Generally, the moschatas are the easiest to grow, and maximas the hardest, especially when insect pressure is a major factor (and it pretty much always is…). Pepos are closer to moschatas than maximas in this regard. Maximas are so attractive to squash pests, including vine borers, squash bugs, and cucumber beetles, that one variety, Hubbard squash, is recommended as a trap crop to lure insects away from other squashes. 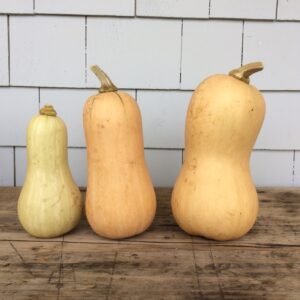 When I have planted buttercups, they invariably suffer much more damage than nearby butternuts, to the point that I have stopped growing buttercups (and other maximas) entirely, and focus on butternuts for winter squash. I grow a bit of delicata for customers who love them, and they do have the advantage of being ready to eat at harvest, unlike butternuts, which require one to two months of post-harvest curing for best eating quality (except for the small varieties, which can be eaten right away).

I really like Johnny’s full-size JWS 6823 PMR butternut, though I wish they’d find a replacement name that’s as sweet as the fruit itself. Their smaller varieties are also terrific, but I’ve found they are harder to sell, as customers seem to prefer a three–to–four pound squash, rather than the one pound of Butterbaby or Tiana.