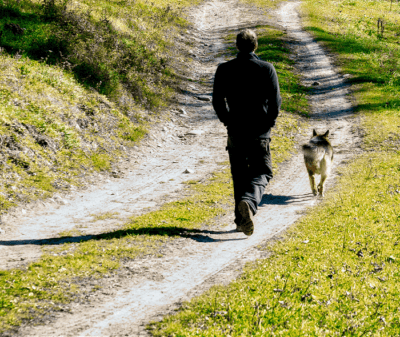 In the spring of 2020, we decided to do a small experiment to test the viability of intersowing crops directly in established Dutch White clover. We put cabbage, squash, and hemp transplants into a 1/10 acre piece of clover. We mowed the clover short with a lawnmower, used a bulb auger on a cordless drill to make a little hole, threw in a transplant and a handful of compost, pulled a line of drip tape down each row, and walked away. The clover immediately regrew and seemed to dominate the transplants. Oh well. We nearly forgot about our little experiment as we busily seeded and transplanted out the rest of our crops and endlessly cultivated. I occasionally noted that the transplants in the clover hadn’t actually died. They were, in fact, even growing a little. But they probably wouldn’t make a crop. By mid-July though, it was undeniable–those crops were really growing. Perhaps they’d yield after all. At harvest, the cabbage heads were equivalent in size to the bare-soil cabbage in the next row over. The hemp was somewhat smaller than the bare-soil hemp, but the flowers were denser, and slower to succumb to mold. The squash yield was unimpressive. All-in-all, we were very pleasantly surprised. We’d avoided any kind of tillage in that experimental section, gotten good yields on two out of three crops, and hadn’t done any work between transplanting and harvesting. We were excited to keep experimenting.

In 2021, we expanded the experiment to a 1/2 acre and included more crops. It was clear that the bulb auger method was too time-consuming for much over an acre or so. Each hole only takes a couple seconds, but placing the compost and transplant in it takes nearly ten seconds. Compared with putting transplants into bare soil by hand, this method was about five times slower. On the other hand, there was no cultivating. I’m still not sure how to do this math and it depends a lot on crop spacing. For hemp, which we plant 4′ apart in rows 5′ apart, it’s great. For kale planted 12″ apart in rows 20″ apart, it’s very time consuming. We made a mental note to explore transplanter options for 2022. The spot we’d chosen, however, doesn’t drain super well–fine in a normal year, but disastrous in 2021, when we received 16 inches of rain in July and more and more and more after that. Few crops–whether in bare soil or in clover–did well that year, so we didn’t learn much.

Still, we felt like we were on to a good thing. For the 2022 season, we got a grant for a Mechanical Transplanter. We put a coulter and an aggressive ripper tooth ahead of the planting shoe to open and loosen a small furrow for the transplant. We had to add a lot of weight (~300 pounds) to the packing wheels to effectively close the furrow, and then counterweight the drive wheel to get good ground contact. (I won’t get into lots of detail here, but I am happy to share the nitty gritty–please contact me if you’re interested.) In the end, the transplanter created a 6-8″ wide furrow and pretty effectively placed the transplants. We also ran the transplanter to create a furrow for direct-seeding, though we could just as easily have used a coulter and ripper alone for this purpose (or, better yet, a no-till planter). The good news for us is that we were able to run the transplanter just about as fast as in bare soil, making transplanting into clover at scale a reality.

Clover sown under hemp with Ruthie in the background. She was two years old there. Photo credit: Lincoln Fishman.

Here’s a rundown of what crops worked and what didn’t this year.

Failures (Neither made much fruit. They seemed to suffer from either low soil temps or clover competition):

Successful, but with a caveat:

When we broadcast the clover, we often mix it with our chicken feed–a mix of cracked grains. Sometimes whole barley kernels make it through the grinder. A number of these managed to germinate this spring and made nice seed heads. Next year, we’ll explore whether drilling barley and oats into the clover in spring is a possibility.

We have a lot of faith in this system at this point, and will greatly expand it in 2023, though it is very much in development.

Here are its current limitations:

1) Crop limited. We believe there are certain crops that will never thrive in perennial clover, such as small, slow-growing direct seeded crops like carrots. Some transplanted crops, like onions, we haven’t experimented with, but we think will not be competitive enough.

2) Cool soil temperatures. Compared with plastic or bare soil, perennial clover shades and cools the soil. It is hard to imagine that it will ever be a good system for early production.

3) Transplanter modification issues. The planting shoe made a furrow that slowly filled in with weeds. Within a few days after transplanting, the clover on either side of the furrow regrew quickly and canopied over the furrow, but weeds did germinate in the furrow. Though they were slow to grow, they emerged and took off in late July. We mowed and weed whacked a couple times to control weed growth, especially of Galinsoga. Weeds were much less of an issue when we were using the bulb auger. Creating less disturbance is possible, but will require more modifications.

4) Yield reduction. While some crops do not seem to exhibit any yield drag in clover, others do. It is difficult to quantify this loss as it varies so much depending on the season, the variety, etc. For the most part ,we feel that some yield loss is economically and/or environmentally justified because of the many benefits of the system.

Benefits of the perennial clover system:

1) Soil health and ecosystem services abound! It eliminates tillage and erosion. The clover feeds the soil biology all year round. Carbon is being captured, rainfall infiltrates easily, moisture is kept in the soil through shading. Pollinators specifically and insects generally are present in huge numbers. Introducing a perennial into our production system undoubtedly leads to a kind of stability in the soil community that cannot be achieved in an annual system, though we have yet to document the peaks and valleys of various classes of soil organisms.

2) Reduced pest pressure. Aside from slug damage on lettuce and some cabbage worm damage on cabbage, there were few pest issues and we didn’t use row cover on any of the crops.

3) Free nitrogen. The clover is constantly fixing N and returning it to the soil, resulting in fertilizer savings.

4) Labor and fuel savings. Even with the additional mowing/weed whacking because of weeds in the planting furrow, the labor per acre was lower than that associated with bare soil cultivation. In between transplanting/seeding and harvesting, the tractor makes zero passes over the field, resulting in fuel and depreciation savings.

5) Pleasant to work in and around. Harvesting in clover is a pleasure. It is never dusty, never muddy. The harvest crew is always standing or kneeling on a lawn of clover. The biological diversity inherent in this system is aesthetically very pleasing. 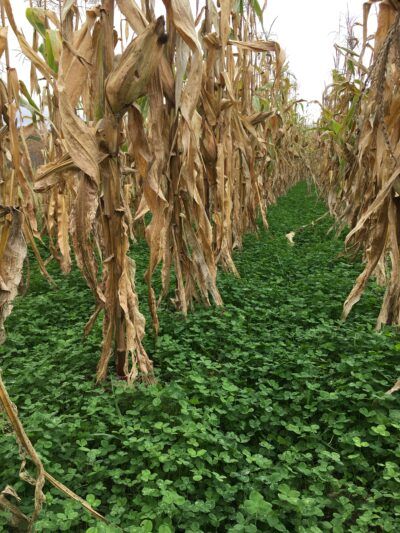 There’s so much we don’t know about this system yet, both because it’s new and because it’s a living system that is inherently far more complex and dynamic than growing in bare soil or plastic. Water and nutrient dynamics are still a bit of a mystery to us. The clover seems to compete for water during crop establishment, but later in the season, it appears to help conserve moisture through shading. Does it help dry out the soil in spring through transpiration? What is the N contribution of the clover in its first year of establishment? Second year? Etc. Does mowing the clover release N for the crop? In what time frame? Does the clover reduce leaching and allow nutrients to persist for longer in the soil? Does it compete for nutrients with the cash crop? If so, which ones? And so on!

How long does the clover persist?

In our limited experience, the clover forms a solid stand for about three years. In the fourth year, perennial grasses and forbs begin to get a foothold, though crops can still thrive. In year five, the clover field begins to resemble pasture, and needs to be plowed down and re-seeded (or grazed or hayed or fallowed). We just plowed down a half acre that was sown to clover in 2018. We put in oats in August 2022, and will transplant onions in May 2023 that will be undersown to clover in July, 2023. So this is not truly a no-till system, but it does make tillage rare. Once it’s fully established on our farm, we imagine that, in a given year, 80% of our acreage will be clover, and 20% will be bare soil. It’s possible that with more frequent mowing and more careful applications of lime and sulfur, the clover could persist for longer.

For 2023, we’ve received a SARE grant, in partnership with American Farmland Trust, Arthur Siller, PhD candidate at UMass School of Stockbridge, and our neighbor at Four Corners Farm. We will gather data to do an economic analysis and a soil health analysis of the perennial clover system versus a bare soil control. We hope this data will help point the way for growers interested in trialing this system who need hard data on potential yield losses versus labor/fertilizer/fuel/soil health savings.

We’re also planning on making modifications to the transplanter to reduce weeds in the furrow, and expanding the number of crops we’re experimenting with.

The real next step for us is working with other growers who think this could be an exciting tillage reduction system for their farm. Ultimately, we hope to be part of a network of growers problem-solving scalable no-till solutions together.

If you’re interested in learning more about growing crops in a perennial living clover mulch, please contact Lincoln at 413-320-8535.