Can I Plant My Tomatoes Now? How About Now?

Home/Newsletters/Can I Plant My Tomatoes Now? How About Now?
Previous Next

Can I Plant My Tomatoes Now? How About Now? 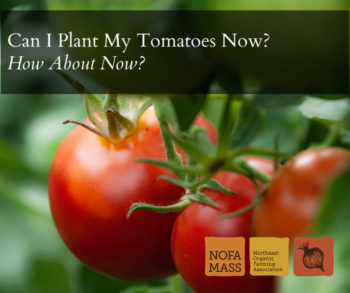 Most of the gardeners I know are optimists, and there is nothing quite as tempting to the optimistic gardener as getting the earliest possible start on the tomato season and, one hopes, the earliest possible harvest. But after a number of years of succumbing to this temptation myself, while I still try to push the season, I’ve learned to hold off planting for much longer than my optimistic self might like.

The reasons for waiting are three-fold and, I think, all related to cold temperatures. First, tomatoes will die in a frost, and even in the unheated hoop house, where I grow most of my tomatoes, it can get nippy well into April. I now hold off on starting my seeds until late March or beyond, and plan to transplant in late April. Second, tomatoes need warmth to grow rapidly, and steady, rapid growth is what you want. There is little to be gained by putting a tomato into cold soil. A four-week-old transplant that sits around for two weeks in the cold can easily be surpassed by one two weeks younger that skipped those two weeks of chill.

The third reason to wait is that, even if the temperature stays above freezing, the stress of the cold can flip tomatoes out of “vegetative mode” and into “generative mode,” causing them to flower before they put on any real growth. Tomatoes in generative mode are easy to spot: the plant remains short for weeks and ultimately months on end; the stem remains skinny and develops knuckle-like swellings at the leaf joints; and flowers form well before the plant is large enough to profitably sustain them. The cool, cloudy May we had last year left me with about a third of my plants in this sorry state, and many of them never fully recovered.

Despite the risk of a repeat of last year’s debacle, I will still be pushing the season this year, hoping for better weather and doing everything I can to better my odds. That means starting my earliest and most cold-tolerant varieties around the 1st of April, while waiting on most of the others for two weeks; transplanting into the warmest soil I can manage in the hoop house; and covering all my transplants with several layers of row cover until they are ready to really take off. (For outdoor planting, I add about a month onto those starting dates.)

If the season is merciful, that should get me the first taste of my earliest cherry tomatoes (Sakura, Sungold) by the first week in July, and serious production of other favorite varieties (Juliet, Big Beef, Apero, and Estiva) a couple of weeks later.

For further reading on growing tomatoes and other high-value crops in protected culture and the importance of temperature on the switch from vegetative to generative mode, try Andrew Mefferd’s book, “The Greenhouse and Hoophouse Grower’s Handbook: Organic vegetable production using protected culture”. http://www.chelseagreen.com/product/the-greenhouse-and-hoophouse-growers-handbook/