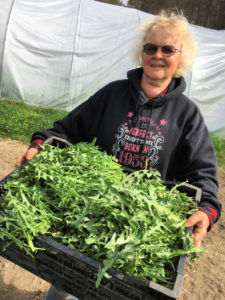 The gifts of nature are all around us, and in the springtime they are constantly reappearing. Right now I am spending a lot of time with dandelions. Probably you knew already that dandelions are good for you. But did you know all the names it has accumulated over the millennia? Witch Gowan, Devil’s Milk Plant, Lion’s Teeth, Golden Suns, Clocks and Watches, Piss a Bed, Stink Davie, Heart Fever Grass, Dog Posy, Blowball, Peasant’s Clock, Cankerwort, Crow-parsnip, Irish Daisy, Doon-Head-Clock, Fortune Teller, One O’clocks, Swinesnout, Wet-a-bed, Shit-a-bed, Bum-pie, Burning Fire, Clocks, Combs & Hairpins, Conquer More, Devil’s Milk Pail, Fairy Clocks, Farmer’s Clocks, Horse Gowan, Lay-a-bed, Male, Mess-a-bed, Pishamoolag, Pissimire, Pittle Bed, Priest’s Crown, Schoolboy’s Clocks, Shepherd’s Clock, Stink Davine, Tell-time, Time Flower, Time Teller, Twelve O’clock, Wishes, Wet-weed, White Endive, Wild Endive (to name but a few!) The wide variety of charming and not so charming names for Dandelion portray many of the folkloric beliefs associated with it as well as reflecting its properties as a strong diuretic.

The plant has a grounding and centering influence, with a particular influence on the solar plexus, bringing focus to emotions. It helps to ground emotions that are scattered and strengthens the emotional body, giving a stronger sense of self. The solar plexus is the source of connections between ourselves and other people, and that it is in this energy centre that usually provides instant likes or dislikes of people, sometimes irrationally. Because the root is a digestive bitter, it works on bitterness and hostility (which are often trapped in the liver) in order to ‘sweeten the person up’. Anger and resentment get trapped in the liver and can lead to depression and self hate if not relieved. Most of the herbs that act on the liver can help with this problem, but that dandelion can be particularly effective. The root can be used to stimulate people who are dutiful and fearful of change. This is interesting because it shows, yet again, the balancing influence of the herb, restoring emotions to a more even keel.

The nutritional content of dandelion extends to all parts of the plant. It’s a rich source of many vitamins, minerals and fiber. Dandelion are a rich source of beta-carotene and polyphenolic compounds, both of which are known to have strong antioxidant capabilities that can prevent aging and certain diseases. Small animal and test tube studies suggest that dandelion have a significant anti-inflammatory capacity. The dandelion plant contains bioactive compounds that have been shown to reduce blood sugar in animal and test tube studies. Some animal studies have shown reduced cholesterol levels after consuming dandelion. Dandelion may lower blood pressure due to their diuretic effect and potassium content. Animal studies have shown that dandelion protect liver tissue from toxic substances and oxidative stress. Some animal studies have shown that bioactive components in dandelion may support weight loss. Several test tube studies have found that dandelion is effective in reducing the growth of cancer cells in various organ tissues. Research indicates that dandelion may increase contractions and movement of your gastrointestinal (GI) tract, acting as a treatment for constipation and indigestion. This effect is likely due to the prebiotic fiber inulin. Early research indicates that dandelion have antiviral and antimicrobial properties. Animal and test tube studies indicate that dandelion may protect against harmful sun rays, aging and skin irritations, such as acne. Research directly relating dandelion to bone health is lacking, though some nutritional components of the plant are known to support the maintenance of strong bones.

I could go on, but you get the picture. Get out there and dig! We take this time of year to dry several gallons of dandelion greens in our Excalibur food dryers. We have two of these dehydrators going night and day in May. And then we dig them up and dry the roots for later teas, use fresh roots for tincture, and yesterday I threw 3 large roots into my “root soup” made with many roots like potatoes, beets, carrots, turnips, rutabaga in a beef and pork stock. Nature has provided us pretty much all that we need. At the end of the day we might even be more fearless and have cleaned out all of our livers of their toxicity and stored anger!

I have only four short months left as your fearless leader and I want to leave the coffers overflowing for the next chapter of this exquisite organization.