Last month you learned about Abby and Jonathan’s experience starting a first year CSA during a pandemic. This month, we’ll talk about the farming practices that Abby and Jonathan have used to get their farm started with limited time and with soil health and weed management as central goals.

The Winter Street Farmers came up apprenticing and managing on organic farms just as the contemporary healthy soils movement was rising, benefiting from receiving a training in standard tillage practices while also having access to education about alternative, tillage-reduced systems. “We were really influenced by seeing examples of how much you can actually grow in a small area,” Abby explained, “and we learned a lot between NOFA workshops and reading farming books.” They decided early in their conversations about their own future farm that it would be no-till.

“We were really focused on soil health and harvest productivity…. with cultivating you’re always working upstream, beating back weeds in a way that’s not good for the soil, for the plants, or for the farmer. No-till methods seemed like an all-around win, because with no-till methods of weed control what you’re doing is actually adding to the soil health, the plants are a lot healthier, and it’s a better lifestyle for the farmer.”

But, of course, even at self-proclaimed ‘no-till’ and ‘min-till’ farms, a certain amount of soil disturbance is unavoidable. As we discussed in a 2018 article, “What We Mean When We Talk About Tillage,” the term ‘no-till’ has wide-ranging and often regionally-defined meanings. In a 2019 survey of farmers attending NOFA Soil Health Field Days in 6 states, farmers were asked what “no till” means to them. Answers ranged from “zero soil disturbance” to “finding alternative processes to get the land ready to use that [improve] productivity.”

For Abby and Jonathan, however, the issue of how (and how often) to till the soil is not a philosophical quandary about the meaning of “disturbance” and the inherent rights of soil microbes—it’s a practical question of how to start out on a path that will drastically cut weed pressure on their farm and maximize the success rate of their crops while cutting fertilizer costs and being good soil stewards.

The core financial viability argument for tillage reduction is that it can help cut fertilizer costs while also reducing farmer labor. By focusing on surface-level interventions to kill weeds, farmers can avoid stirring up the soil, which brings up more weed seeds. Weed seeds can remain viable in soils for decades, and soil disturbance increases their chances of meeting the right depth, temperature, air and moisture conditions to trigger germination.

No-till / reduced till farmers endeavor to kill off all the generations of viable weed seeds in the top inches of soil, and basically bury the rest. If farmers continue to spot-weed to control for wind-blown and bird-dropped weeds (and for those weed seeds brought up in disturbance events like harvest and planting), then they can drastically cut labor costs and focus more on planting, harvesting, fertility and pest control.

Conventional farmers have one big tool in their toolbox that organic farmers like Abby and Jonathan do not—herbicide. That’s why there is about 20 times more land in conventional no-till than in organic production of any kind. Organic no-till is still rare. It requires a lot of skill, knowledge and ingenuity. It requires upfront labor investment—mulching, tarping, cover cropping, and spot-weeding—in order to achieve low weed-pressure soils down the road. Abby and Jonathan can’t–and would never—hit their fields with glyphosate to clean the slate for their crops. 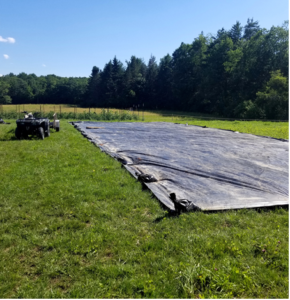 So, as Jonathan put it, “to start to no-till you have to till.” Abby and Jonathan’s approach to converting their land from hayfields to vegetable fields was designed to reduce the amount of tractor passes that would be needed.

“First, we occultate,” Jonathan explains, referring to a practice of using silage tarps to deprive surface plants of light, smothering them. Occultation kills many annual weeds but doesn’t achieve complete suppression—even after many months—of especially resilient perennial weeds like crabgrass and bindweed.

“Then, we then do a couple passes with a tractor mounted Land-Pride rototiller in the same direction as the bed. This breaks up the sod, which isn’t entirely dead after [occultation]. Occultation weakens the sod. It saps its strength, and then we rototill.”

Jonathan and Abby’s beds are shaped by the wheel track. All their tractors are set up with the same wheel width, and once their beds are created, they’ll keep their feet and tires in the wheel track pathways and avoid walking or driving on the soft soil between.

After rototilling, Jonathan subsoils each bed down the middle. He uses a Tractor Supply single shank subsoiler, just to open up the deeper levels of the soil to encourage root growth.

“Then we hand rake the beds, then we do another round of occultation. That last occultation is the most important: we get the seeds brought up from our bed prep to germinate and die.” Quick occultation before planting is common on small no-till farms, and is used as a no-till version of stale bedding. 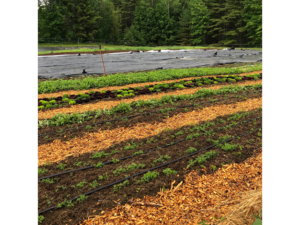 “After that,” Jonathan continues, “We are ready to mulch and plant. This spring we had all the beds prepped and tarped, and we would just peel back the tarp one bed every time we need to plant a bed out, moving down the field.”

The goal at Winter Street Farm is to not leave any soil exposed. Each bed is seeded or planted with a paper pot transplanter as soon as the tarp is peeled back, and then the paths are mulched with woodchips that Abby and Jonathan made by clearing deadwood out of their woods and renting a chipper.

On the beds, they’re experimenting with sawdust, leaves and straw. They took the precaution of using extra nitrogen fertilizer under the sawdust, to avoid tying up the nitrogen needed by their crops. In their hoophouses, Abby has lined the paths and edges with used burlap coffee bags she picked up in pallet-sized bales from an Equal Exchange roastery. 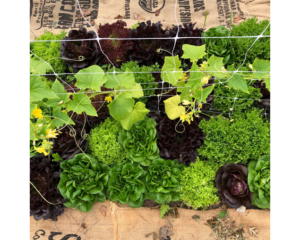 Salanova and cucumbers intercropped in the caterpillar tunnels with burlap aisles.
Photo by Caro Roszell

“It’s already working well,” Abby comments. “We just don’t have to cultivate.” While machine cultivation has not been used at Winter Street Farm, some hand weeding is inevitable. Abby estimates that the farm has invested a total of 20 person-hours into hand weeding this year. The farm’s hoe has been used just once—to incorporate side-dressed fertilizer—and they have a flame weeder on hand for pre-germination weed control. An important strategy for Winter Street Farm, Abby explains, is “having a bunch of different tools for stale bedding without turning over the soil,” enabling them to control the weed pressure of a first-year farm soil while minimizing disturbance. “Most of my weeding, though, is covering the weeds with weed mat or silage tarps,” she explained. “That’s our primary weed control strategy.”

Intercropping is another strategy that is extensively used at Winter Street Farm to maximize bed space, keep soil covered, and promote soil health. New science suggests that having a diversity of plant species and lots of roots in the ground builds soil health, while having thicker plant cover means that more photosynthesis is happening per square foot (meaning more carbon-rich root exudates are pumping into the soil). Intercropping is another win-win for profitability and soil health, so Abby and Jonathan include it in their toolbox.  Across the farm, quick crops like radishes and cut-leaf greens are planted alongside longer-season crops that don’t take up as much space right away, like peas, cucumbers, tomatoes and eggplant.

They’re also double cropping—meaning, they’re planting fall crops where their spring crops have been removed, with just a few weeks between harvest and planting.

Abby and Jonathan serve 60 CSA members while cultivating just ¾ of an acre. Through intercropping and double cropping, they are able to get multiple crops out of each row foot. 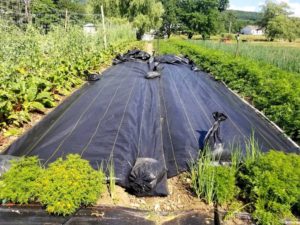 Weed mat is used to keep soil covered as beds are harvested. Photo by Abby Clarke

When flipping beds, Abby and Jonathan use bed-width weed mat to smother the former crop. “Flame weeding doesn’t work,” Abby reported, “We get regrowth even with arugula. Weed mat works best, about 7-10 days for a week with temperatures in the 90s. We leave it on more like 2-3 weeks when it’s cooler.” Next, they use a tilther (a lightweight drill-powered tool designed to work the top inch of the soil) to incorporate fertilizer and crop residues and create a fluffy seedbed just before planting.

For example, in a recent bed flip, after two cuts of spinach were taken in May, Abby laid weed mat for 10 days to terminate the spinach crop. Before planting the next crop (kale transplants) she broadcast pelletized organic fertilizer and incorporated it with a tilther, transplanted kale seedlings were planted before the end of June. The bed flip took just a few weeks from harvest to planting the next crop. “There was minimal compaction,” reported Abby, “and we don’t have weeds.”

While spinach can be smothered after harvest fairly easily, crops with significant biomass must first be flail mowed before using weed mat. Winter Street Farm received a grant from American Farmland Trust’s New England Farmer Microgrants program to purchase their Land-Pride flail mower, which was a key equipment purchase for completing the set of tools needed for their tillage reduction strategy.

“I love no-till farming – everything about it is great. It feels like we are building soils right off the bat and keeping the weeds under control. It feels really controlled, and we get to enjoy our bugs and frogs,” Abby said. 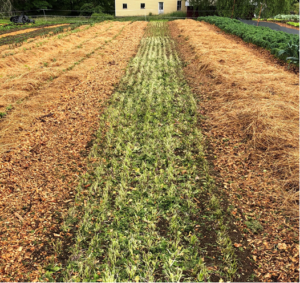 “The neighbor is really curious about what we’re doing,” observed Jonathan. “He asks me every time he sees me—‘your tractor seems so clean! Don’t you use it?’ And I tell him, I like not to use it, because less use means less maintenance, less problems, and less cost.”

“A system that uses tractors to a minimum is a better system,” he concludes.

To keep up with Abby and Jonathan’s story, please follow them at http://www.facebook.com/winterstreetfarm

Keep an eye on our Facebook page and our newsletter for announcements about remote Soil Health Field Days this fall.

Read Part One of this story here.