My lightweight pneumatic wheelbarrows are the single most useful tools around my gardens. I use them every day, multiple times a day, for ferrying compost and leaves onto my beds, and produce off of them; for carrying brush and weeds to a rot pile; for moving stakes and tools and lime bags and all manner of other heavy things.

I’ve made four modifications to my wheelbarrows, each of which has increased their utility and expanded the range of things they can do for me. Each mod is easy and quick to do yourself: 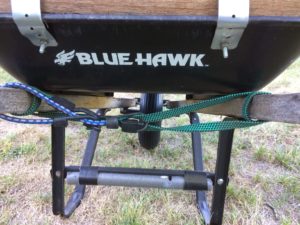 Bungees are stored out of the way; pipe insulation is taped to the crosspiece, and the plywood sides are bolted onto the wheelbarrow pan with heavy flashing.

Always bring a bungee. Bungee cords are great for keeping a load of brush from falling off in transit, or supplying just enough hold to carry a load of garden stakes with confidence. I keep one or more bungee cords wrapped around the handles, down low and out of the way, but always at hand.

Bolt on a bread tray. If you have some bread trays, you likely know how useful they can be around the garden. I use mine for holding and transporting seeds trays (two 1020s fit well into many standard bread trays) and for harvesting tomatoes into right off the vine. The trays don’t sit well in the wheelbarrow pan, though, inevitably sliding one way or another and making stacking trays a gamble. I solved this problem by bolting a tray into the wheelbarrow pan. I bolted only the front two corners, which is plenty secure, and used wing nuts for quick attachment and removal—it takes no more than a minute to put it on or take it off. With the tray in place, I can stack three or even four trays on top of it, allowing me to move fifty or more pounds of tomatoes at once from the hoophouse. You can do the same thing with bulb crates, though they tend to be fairly stable in the wheelbarrow even without bolting. 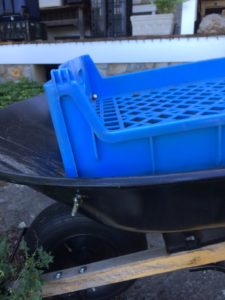 A bread tray is bolted through the pan and secured with wingnuts.

Build high sides for moving leaves. If you mulch with leaves, this is a great way to get them onto your beds. I use 1/8” lauan plywood, about two feet high, to make two sides and a back, leaving the front open. The sides project forward almost but not quite as far as the lip of the wheelbarrow pan, so that when the barrow is tipped, they don’t contact the ground. The sides are attached to the back piece, and both sides and back are attached to the pan, using small strips of heavy flashing and short bolts. This takes about five minutes to put on and take off, and could be made even quicker with wing nuts. I leave this on for much of the year (and move tomatoes with my other wheelbarrow), because it is so great at moving all manner of materials, including brush and weeds. 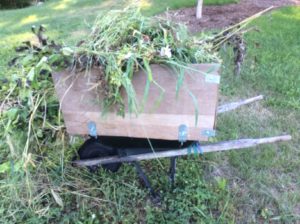 The high sides allow big loads of lightweight
material such as brush and weeds,
and especially leaves.

Have any other wheelbarrow mods you love? Let me know at farm@hopestill.com