By Caro Roszell and Jocelyn Langer

*originally published in the Fall 2020 issue of The Natural Farmer 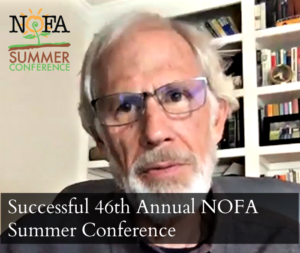 What do you get when you put over 400 farmers and gardeners into an online learning forum for three weeks in the middle of summer? A rich and eventful conference. That’s what you get. The 46th annual NOFA Summer Conference was a fantastic foray into online learning with over 60 workshops and events, live music performances, games, a raffle, a keynote with Tim LaSalle and a children’s conference with music and farming games.

The journey of making an online conference a reality was filled with learning, problem solving, and creative collaboration. When it became clear this spring that large in-person events would likely be called off for the summer, NOFA staff began reimagining the conference. The NOFA Summer Conference has been an institution in organic circles for nearly half a century, and we had help from the entire NOFA community in visioning the remote version of this historic event. NOFA staff from many states offered ideas and support, and we received insights into online conferences and marketing from NOFA friends including Michael Kilpatrick from Growing Farmers, and a group of agricultural conference organizers led by NESAWG (North East Sustainable Agricultural Working Group) and California based Eco-Farm. Between meetings, conference organizers researched new technologies and brainstormed new ways of incorporating not only a rich array of workshops, but also the many entertaining events that make the NOFA Summer Conference the highlight of the summer for so many of us.

Thanks to the visionary leadership of conference coordinator Jason Valcourt and a dedicated team, our first virtual conference was a great success. Although we weren’t in person together, the learning never stopped and the online community brought life to a complicated and uncertain time. Participants from all seven NOFA states and beyond were involved, either joining workshops in real time or through purchasing the video recording package. 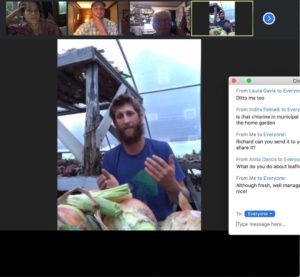 As usual, the conference featured a wide variety of workshops for a range of audiences. Long-time presenters Ed Stockman, Elizabeth Henderson, Julie Rawson, and Jack Kittredge returned for their third decade of NOFA workshops to discuss pressing global topics such as glyphosate, soil carbon, and social justice. Linking agriculture to a broader movement, Bonnie Hudspeth and Adam Trott shared steps for creating a cooperative business, while Jade Alicandro Mace focused on one simple, practical step toward increased health: making herb-infused bone broth. Keeping up its annual tradition, this year’s conference provided something for everyone, from full-time farmers to small-scale gardeners and organic consumers.

One of many participants who was pleasantly surprised at how the virtual conference managed to capture so many key elements of the in-person event was presenter Christie Higginbottom. Higginbottom shared that this year’s conference helped to counteract the stress of the pandemic, connecting her with fellow NOFA members and reinforcing her support for the organization’s mission. Like many presenters, Higginbottom appreciated the tech training provided in advance by NOFA staff, and plans to use this newly gained experience to continue sharing her knowledge online in other venues.

Higginbottom observed that, “The face-to-face visuals and shared chat formats brought me closer to participants I might have only met in passing at a physical conference,” and added that, “The fun Bracketology (determining the “Best of the Best” in an elimination-style game) and food/farming Trivia sessions helped to fill the deep void that social distancing has created.” Many participants can relate to Higginbottom’s upbeat conclusion: “I hope we can all share a physical space soon, but we can also recognize the opportunities now available for outreach to a broad community as a result of this bold experiment!”

After three weeks filled with informative workshops and engaging entertainment, the conference concluded with a keynote address by Tim LaSalle, co-founder of the Center for Regenerative Agriculture & Resilient Systems and Adjunct Professor of the College of Agriculture at Chico State. In his talk entitled “Climate Solutions are Grown in Soil,” LaSalle pointed out that the current culture of agriculture is based in soil-degrading practices that place humanity at risk of running out of harvests within 60 years. Soil destruction helps drive climate change, transferring carbon from mistreated soils into the atmosphere as carbon dioxide. 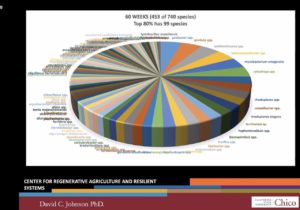 LaSalle explained that at Chico State, there is paradigm-shifting research underway that shines a light on a path forward. Studies of what his team calls “Biologically Enhanced Agriculture Management” (BEAM) show comparable yields with lower input costs and far greater soil health outcomes. With BEAM, early research shows, one can farm while actually restoring the soil: enhancing the soil’s ecosystem, tilth and fertility, and priming fields for greater future yields.

The key to BEAM is raising the fungal to bacterial ratio of soils. Tillage and chemicals destroy the fungi in soils, shifting the balance toward bacteria who tend to drive carbon loss to the atmosphere. Fungi serve as important brokers in the carbohydrate economy of the underground, transmitting the chemical signals from the plants to the other microbes of the rhizosphere who can harvest nutrients from the geological component of the soil and fix nitrogen from air. LaSalle call this the “self-fertilization” of the plant-microbe ecosystem. 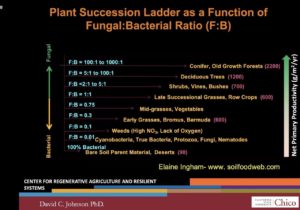 In addition to increased crop yields, LaSalle reported that research shows a decrease in soil respiration (loss of carbon as CO2 into the atmosphere) as the fungal to bacterial ratio increases. More carbon is retained under BEAM, which translates into improved nutrient and water holding capacity, better soil structure, and an agriculture that can help solve climate change.

LaSalle concluded his keynote address with a reflection that, “The Earth needs reinvestment because we have taken from her and we have not given back. And now we know how.”

This year’s conference has been quite the journey and we are happy to have taken it with you. Thank you for attending and supporting the conference. We hope you had a great time and learned a lot.