What is the National Day of Mourning and Why are we Talking About It?

Home/Newsletters/What is the National Day of Mourning and Why are we Talking About It?
Previous Next

What is the National Day of Mourning and Why are we Talking About It? 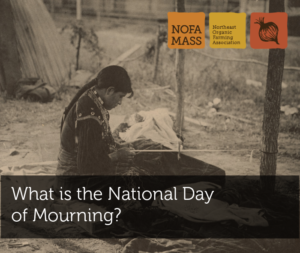 Late November is a time of harvest festivals, family gatherings and the unofficial start of a time of rest for farmers. But it’s not a time of happy celebration for everyone.  Traditionally, Thanksgiving is modeled on a 1621 harvest feast shared by the English colonists (Pilgrims) of Plymouth and the Wampanoag people. As the story goes, colonists celebrated their first successful harvest season in America with a festival, and were joined by neighboring Native Americans. They shared food, socialized and celebrated for three days in unity and peace. This festival became known as the “First Thanksgiving” and was commemorated as a National holiday in 1789.

Of course, this is the story that white colonists have passed down throughout modern history, a story written and recorded by the colonists themselves. Native Americans share a different side of the story, as passed down through family traditions and storytelling. This side of the story does not include Native Americans fading quietly into the background while colonists grew stronger and more powerful, eventually claiming ownership of all land in sight.

United American Indians of New England (UAINE) shares, “Many Native Americans do not celebrate the arrival of the Pilgrims and other European settlers. Thanksgiving Day is a reminder of the genocide of millions of Native people, the theft of Native lands, and the relentless assault on Native culture.”

Native Americans and colonists did indeed go to war with each other in 1675, during the fourteen-month long King Philip’s War (also known as the First Indian War, the Great Narragansett War or Metacom’s Rebellion), a conflict that cost hundreds of colonists and thousands of Native Americans their lives.

According to UAINE, “Participants in National Day of Mourning honor Native ancestors and the struggles of Native peoples to survive today. It is a day of remembrance and spiritual connection as well as a protest of the racism and oppression which Native Americans continue to experience.” 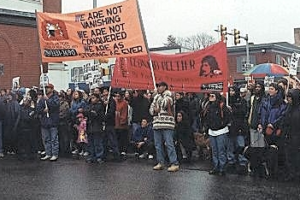 As conversations on race and culture evolve and people become enlightened by a greater picture and context, it’s important to respect and honor indigenous experience as part of our shared history. As growers, may we continue to celebrate the harvest and embrace our neighbors in shared bounty. But let’s also make space for the feelings of grief and loss that many of us are feeling from the ongoing trauma that Indigenous communities have experienced, and continue to experience, at the hand of European colonists and colonialist policies.

If you would like to learn more about, or participate in, the National Day of Mourning, there will be a gathering for Native Americans and supporters at noon on Cole’s Hill in Plymouth, Massachusetts on Thursday November 25, 2020.