Home/Newsletters/Key Insights from the Climate Adaptation Fellowship: Part 2
Previous Next

We Need to Talk About Nitrous Oxide Emissions

In our February newsletter, I shared some takeaways and resources around Massachusetts and New England based precipitation and temperature projections from the Climate Adaptation Fellowship, a peer-to-peer learning program funded by SARE and run by a consortium of land-grant universities. The mission of the program is to help farmers and farm advisors learn together about climate change mitigation and adaptation, and then apply that learning through a farm adaptation plan.

In this newsletter, I want to share another key takeaway for me—and that is the fact that as farmers, gardeners and food systems activists we need to spend more time thinking and talking about nitrous oxide.

Here in the NOFA community, we spend a lot of time thinking about how to build carbon in soil, yet the idea that carbon is overemphasized in discussions about climate and agriculture is also not news to anyone who attended our May 12, 2018 workshop with Walter Jehne or who follows his work. Carbon has become the charismatic megafauna of greenhouse gas emissions (GHGs), yet other gasses also play a role in driving climate change like hydrochlorofluorocarbons (HCFCs), chlorofluorocarbons (CFCs), methane, nitrous oxide, and water vapor.

While most of the world has been focused on reducing carbon emissions, global emissions of N2O have been steadily increasing in recent decades—up 30% since 1980 according to a report released last fall. And the biggest culprit in anthropogenic N2O emissions is agriculture, “including 74 percent from cultivated soils and 5 percent from manure management,” reports Civil Eats in an article from 2019. 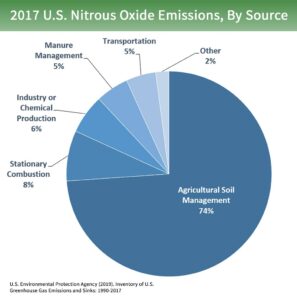 “Although previous research suggested that emissions occur only during the growing season because microbes aren’t active during winter, climate change is causing soils to warm up and thaw more frequently, activating the microbes and leading to winter N2O emissions,” the article continues.

While most studies point to synthetic nitrogen fertilizer as the key source of rising N2O emissions, organic farmers aren’t off the hook. And, while it is certainly true that carbon and nitrogen are intimately connected in the soil (increasing soil organic matter helps to hold more nutrients in the soil, including nitrogen), N2O emissions reduction practices are not necessarily the same as soil carbon building practices.

Of course, not all organic farms use more land—those of us in the NOFA community know that organic farms in New England tend to be smaller-scale and more bio-intensive. Nevertheless, even small organic farmers may be unwittingly increasing their N2O emissions in their quest for soil health.

“Nitrogen (N) is a slippery, shape-shifting nutrient,” wrote Noah Courser-Kellerman (NOFA/Mass board member) in an article for the July 2019 NOFA/Mass newsletter. He writes,

Driving up biological activity in the soil, a central goal of the soil-health oriented farmer, can potentially mineralize more N than plants can take up and lead to N leakage in the form of leaching or N2O emissions. Complicating matters further, cover crops—which are often seen as an unmitigated good— can increase N2O emissions especially when legumes are over-emphasized in the mix and when incorporated into the soil.

So how can organic farmers and gardeners help to reduce N2O emissions from their soils? Well, if you read the Civil Eats article in full, you’ll catch a few suggestions: always mix a grass type cover crop in with your legumes to help tie up the nitrogen, and instead of incorporating the cover crop, leave it on the surface of the soil as mulch (ie, practice no-till methods). Also, make sure your irrigation is as efficient as possible—over watered, saturated soils are thought to release more N2O.

Interestingly, keeping the soil pH well buffered may also be a major brake on N2O leakage.  A French study published in Nature last year showed clear reductions in N2O emissions on limed test plots, and found that “N2O reduction is poor when pH is lower than 6.4 and totally efficient at a pH higher than 6.8–7 with a transient zone of efficiency in the 6.4–6.8 pH range.” The study’s authors estimated that “liming could potentially decrease France’s total N2O emissions by 15.7%.” While I have recently been hearing some debate from the Soil Food Web community about whether liming is important in the context of plants’ ability to adjust pH in the rhizosphere, the potential impact of liming on N2O emissions is worth adding to the list of considerations around pH management in our very acid-tending New England soils–but, of course, the GHG emissions related to mining and transport of agricultural lime are an important consideration in that discussion.

As Noah’s discussion makes clear, one can understand various actions on the farm (or in the garden) as a series of accelerators or brakes to N mineralization, and learning how to drive the farm’s N cycle smoothly with the greatest release during peak crop demand is the key to both optimizing the farm’s fertility budget and also to minimizing nitrogen pollution.

For a thorough overview of the agricultural nitrogen cycle, see “The Nitrogen Cycle: Pools, leaks and wallets full of nitrate” and for a great overview of N budgeting, read “Practical N Management on the Vegetable Farm.”

Over the past five years, I’ve seen interest in soil carbon absolutely skyrocket—it has been so heartening to see farmers bring their doggedness and innovative spirit to the task of creating new farm systems focused on soil carbon-sequestration. N emissions are a harder, more mercurial target, but by learning about and attending as carefully to the nitrogen cycle as we have learned to do with the carbon cycle, we can address this overlooked threat to our future together. 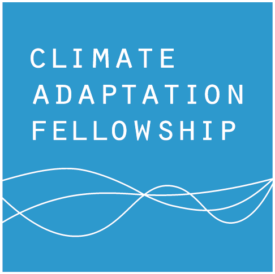