The Farmer’s Voice in the Climate Crisis

The Farmer’s Voice in the Climate Crisis

How Climate Challenges Expose the Need for Regenerative Agricultural Practices

It goes without saying that agriculture in the Northeast is being affected by climate change, and Massachusetts farmers are no exception. From more frequent and extreme storms, to changing weather patterns and warmer winters, these events and their compounding effects combine to make it increasingly difficult to make a living as a farmer. 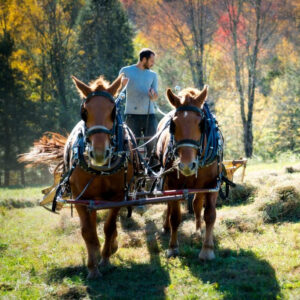 Seemingly, the farms most affected by changes in climate are those that are starting out with poor soil quality or those that are growing in a location that is susceptible to storm damage. Take Sawyer Farm, for example–a diverse horse-powered farm where Lincoln Fishman and a small team have found a niche growing specialized storage vegetables, like carrots and beets, while maintaining pasture and cutting hay for their horses.

Located in the hills in Hampshire County, Sawyer Farm’s land has been subject to some dramatic changes due to recent weather. In two of the past four seasons, late season rains (the tail end of hurricanes) have turned the soil to mud starting in early September, leading to poor size-up and rot, which led to an estimated loss of 90% of root crops in 2021, and a 70% loss in 2019- valued at about $15,000 in potential sales. Because of the hilly location, heavy rain events caused visible topsoil and nutrient loss due to runoff and erosion, especially in areas of exposed soil. Knowing that over time this can lead to dramatically decreased soil fertility, Lincoln has almost entirely transitioned to no-till techniques to try to maintain the health of their soils. In a no-till system, the soil is never bare and has greater capacity to withstand storms and absorb rainwater. 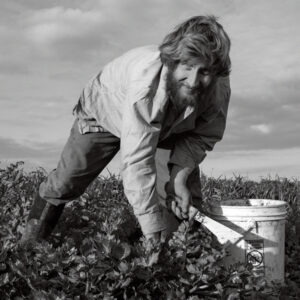 They are uniquely positioned to see the benefit of maintaining soil structure and high organic matter because their soil type is so easily depleted. After the 2016 drought exposed just how fragile their operation could be, they also reduced tillage and started mulching to keep the soil covered. They reworked their crop rotations in order to make planting into untilled ground work for their crops, tarp for winter weed management (another new issue due to climate change–winter weeds) and have learned to minimally disturb land to keep the soil structure intact. These changes in practices have not only created a safety buffer for their soil in times of drought, but they’ve found that leaving their clay-based soil undisturbed when it’s wet has made things physically easier on them and their working oxen team.

Despite good land stewardship and a community willing to pay a premium to support good practices, it’s a possibility that growing food will soon no longer be viable for growers in the most susceptible locations. Lincoln acknowledges that long-term, vegetable-growing areas are shrinking, and the land he is on might be best used for haying in the future. He considers that environmental costs may outweigh the benefits if he continues efforts to modify the operation for better vegetable growing. Noah and Sophie actually have plans to relocate their farm next season due in part to the threat of rising sea level and increasing environmental and financial challenges to growing food in Essex. As viable farmland becomes more precious, it makes sense that farmers on traditionally sought-after farmland, like Dan Pratt of Astarte Farm in the Pioneer Valley of Massachusetts, have identified a need to foster a farm ecosystem resilient to threats from the ever-changing climate. 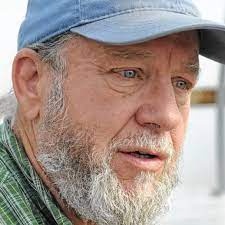 Over the past twenty years, Dan has seen how even nice loamy soil has become depleted by generations of damaging cultivation techniques. He noticed a flatline in organic matter and decreased structural integrity. Since then, he and his team have gone out of their way to protect the ecosystem on their small farm; avoiding biocidal sprays, reducing tillage, and increasing organic matter in the soil, which has been enough to see dramatic differences in soil health and higher quality crops. They have experimented with beetle banks and predator/pollinator habitat programs. Even so, they aren’t immune to damage from storms and heavy rainfall. This season 50-70% of their squash crop was lost due to Phytophthora, a fungal disease which thrives in wet soil. (This disease can remain in the soil for up to 20 years!) To avoid spraying damaging fungicide, they tried a mustard cover-crop remediation method. Neighboring conventional farms seemed to have far worse crop-loss and standing water than Astarte did this season, proof that the work Dan continues to do to maintain the local ecosystem and soil health is paying off.

In addition to an increased frequency of moisture-related diseases, Massachusetts farmers have seen a wide variety of climate-related issues on their operations. There are new pest species to consider, increased weed pressure due to warmer winters, wild temperature fluctuation that can ruin a whole season for a crop (you may recall the peach losses in 2017), or rain that doesn’t stop for long enough to make hay. Most growers build some room for failure into their business plans–potential losses come with the territory. But with greater environmental threats and more climate uncertainty, tight margins in an agricultural business become even more slim. Noah notes that he and Sophie have structured their business to have a very small number of employees in order not to extend risk beyond themselves, knowing that they cannot revoke wages if a season doesn’t go as planned. 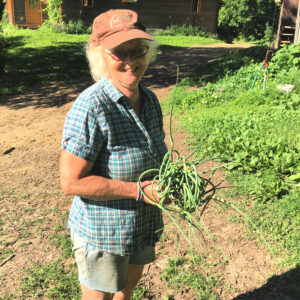 While many of these issues seem impossible to plan for, some aspects built into a farm can inherently provide protection. Julie Rawson, farmer at Many Hands Organic Farm in Barre, Massachusetts, talks about how planting perennial trees and windbreaks provide protection against storms, foster biodiversity and keep farmland flourishing. Growing up farming in Illinois, where large farms have depleted the soil with chemicals and there aren’t naturally sheltering trees and hills, she considers the Northeast to have some fortunate conditions–if not the best soil in the world. As others have concluded, Julie also emphasizes the necessity for vegetable farmers to keep soil covered to keep it porous and healthy, saying that growing more perennials actually makes that job easier. On her farm, there are 100 fruit trees with a complex intercropping system that incorporates meat birds as well as vegetables. She uses methods like sap analysis to treat crops typically susceptible to pests via fertility, with much success. She feels minding diversity and wildlife supports a farm ecosystem, and trees go even further, contributing to the health of the earth and influencing weather for the entire planet.

It’s clear from most NOFA farmers experiencing the effects of climate change that taking care to protect soil health and the ecosystem for the future is priority number one for a sustainable farm business. But it’s also clear that most farmers making the switch to regenerative practices like no-till and beyond are doing so of their own volition. Lincoln pointed out, he chose to change practices on his farm for the long term benefit of preventing erosion and improving soil health, but he knows that in the short-term, those fields would have grown crops for more years even while eroding. In shifting to more environmentally-conscious systems, like converting to no-till drilling, heavy mulching and undersowing, a lot has to change on a farm. There is increased labor, risk, and financial burden; all costs which fall on the farmer.

As Julie says, the economics of farming are the hardest part. “We aren’t set up in this country to do things the right way. We have subsidies going to big glyphosate-based corn and soy farmers. There are some rebates for organic farmers, but we need to make greater efforts to incentivize farmers to be using better methods.” If climate-resilient practices are to be adopted on a larger scale, it needs to be financially viable for farmers who have employees (and bank loans) to pay every year- farmers who are currently incentivized to meet their bottom line by using the quickest fix and squeezing crops out of land at any environmental cost, rather than taking steps to steward the land long-term.

It’s not simple to address all of these issues, but it’s clear that farmers have considered how it could be done. Dan and Julie emphasize the need for farmers to understand the urgency of climate threat and want to act, and the potential impact of seeing their peers succeeding in doing so with regenerative agriculture. In addition to being glad for the programming of organizations like NOFA/Mass, Lincoln voiced a desire for stronger policies supporting these efforts, like payments for ecological services measured by increases in organic matter. Noah mentioned his frustration at the way land in Massachusetts is currently protected for agricultural use, saying policy could specifically protect small farmers if incentives were to stipulate more food productivity or include an owner-operator clause. He also identified the need to actively assist those historically harmed and excluded by government policy, namely BIPOC farmers. Making structural changes to a farm takes resources as well as an interest. The more easily individual experiences are shared, tools and methods can be accessed, and farmers are supported financially, the more likely it is that adapting agriculture that is climate-resilient becomes the norm.

The discussion around amplifying the farmer’s voice in the climate crisis will continue at the NOFA/Mass Winter Conference on Sunday January 16th, 2022, with a panel-led session titled “Boosting Farmers’ Voices in Climate Policy and Action”. 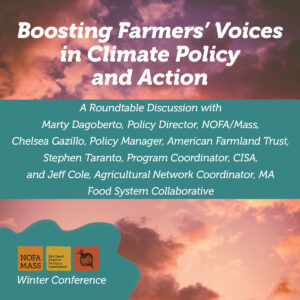 Farmers are on the frontline of climate destabilization. How do we bring their voices to the table where climate action is being discussed? NOFA/Mass Policy Director Marty Dagoberto will facilitate a discussion with agricultural policy advocates and NOFA farmer-members to help answer these questions. What climate impacts did they feel this past season? How are they adapting? How can we work together so that the farmers’ voices on climate policy are heard on Beacon Hill and in DC?

We hope that you’ll add your voice to the conversation. Register here to attend the 2022 NOFA/Mass Winter Conference online on Saturday January 15 and 16. We’ll also be publishing more articles on this subject in NOFA/Mass’s upcoming newsletters. We would like to hear from a wide range of farmers, so if you’d like to add your voice, reach out to Kathleen, NOFA/Mass Journalism Intern and farmer/writer, at kathleenernsting@gmail.com.

Thanks to the following farmers for their wisdom and contributions to this piece: