A version of this article was first published in the Montague Reporter in Spring 2017 and was updated to include more recent information.

In this time of the Anthropocene, when human activity has been the dominant influence on climate and the environment, stories about biodiversity loss have become heartbreakingly common. Once limited to the occasional report of a notable megafauna—the endangerment of pandas, snow leopards, elephants—today our awareness of species engagement extends to those small and oft-taken-for-granted service workers of earth’s ancient plant propagation engine: pollinators.

Yet the very workaday nature of the wee beasts that once – to most of us—registered as no more than the movement and sound in the summer air of our backyards should tell us something of how we can help – unlike snow leopards, they live among us, so shouldn’t the opportunities to offer support lie all around us where we live and work?

The Rusty Patched Bumblebee: Canary of 2017

In 2017 the US Fish and Wildlife Service officially added the rusty patched bumblebee to the Endangered Species list. According to the Xerces Society (an organization dedicated to the protection of invertebrates and their habitats) 28% of all native bees in North America and Canada are in an International Union for Conservation of Nature threatened category.

“Three-fourths of the world’s flowering plants and about 35 percent of the world’s food crops depend on animal pollinators to reproduce,” according to the USDA Natural Resources Conservation Service. And while some crops can be (and are) pollinated by trucked-in honeybee hives, wild pollinators work for free.  “More than 3,500 species of native bees help increase crop yields. Some scientists estimate that one out of every three bites of food we eat exists because of animal pollinators like bees, butterflies and moths, birds and bats, and beetles and other insects,” according to NRCS.

For native insect species that specialize in certain native plants, however, diminishing numbers of their own population means a slowdown in native plant pollination, which in turn results in less food for specialist pollinators. Likewise, some insects require a specific plant to host a phase of its life cycle—famously, milkweeds (Asclepias) are the only food source for the larvae of the monarch butterfly. If one member of this delicate partnership goes extinct, so may the other—and a collapse of a few native species can trigger further ecological losses as each strand in the web of life tugs at the others.

Why Are We Losing Our Pollinators, and What Can We Do to Help?

Obviously, reducing insecticide use will reduce environmental threats to insects—the science on this is not at all controversial. That’s why NOFA/Mass is working so hard to promote H.763, An Act to Protect Massachusetts Pollinators.  (Call you legislator right now, please!)

But if you’re reading this, you probably aren’t someone who is using insecticides. And limiting pesticides is not all we need to do to help pollinators. As alluded above, we must protect and enhance their habitat and their food sources: native plants. Habitat loss is generally cited after pesticides among the leading causes of insect population decline. Increasing urbanization and suburbanization has fractured the natural sweeps of New England forest, bog, and meadow into impervious hardscape, chemically-treated lawns, and tidy borders of ubiquitous plant imports like hosta, forsythia, Asian arborvitae, and miscanthus. Imported domestic plants tend to have very little value to native insects, while a single native plant species can serve dozens, even hundreds of species.

According to Dan Jaffe, local conservationist, author, photographer and lecturer focusing on native plants landscaping, there is a really helpful web resource called the Native Plant Finder, which can help you find the perfect native plants for your own area and learn how many insects are supported by a given plant. A quick search of your zip code will give you a list of native plants to grow in your garden, ranked by how many native insects they support.

Also, the British Natural History Museum hosts an international database on native plants and their insect symbionts.  Neither web resource is complete, but “sometimes when there is not one plant in one it will show up in the other,” Dan advises.

Increasing the ecologically-managed native plant population of our residential landscapes would not only help support native insects, but would also help slow the decline of North American native bird populations. According to a study by the University of Delaware and the Smithsonian Institute for Migratory Birds, chickadees require 70% of the plants in their nesting area to be native in order for the plant ecosystem to support enough insect life to support their young and keep their population steady.

Getting Started with Native Plants at Home

Just as easily as a lawn can be created, it can be ripped out to make room for native habitat. “Most lawns are food deserts for pollinators,” says Cayte McDonough, Nursery Production Manager for Native Plants Trust (formerly New England Wild Flower Society). McDonough grows native plants at two non-profit nurseries—Nasami Farm in Whately and Garden in the Woods in Framingham—for use by landscapers, homeowners, and ecological restoration projects.

To add a wildflower border or bed to your yard, start by cutting your turf into sections and pulling it up like old carpeting. If you have a season’s lead-time on a section, try smothering the area with cardboard or tarps to kill the sod. Put your sod sections root-side up into your compost pile, or use them to replace sections of damaged turf in the parts of your yard you’re keeping. Amend the area with finished compost as needed. It’s a good idea to have some mulching material (wood chips, cardboard, or straw) on hand before you start planting, because covering the soil keeps the roots of sensitive transplants at a more even moisture and temperature level than exposed soil. But don’t cover your soil completely—70% of native bee species are actually ground-nesting, and require access to patches of bare soil to make their tunnels.

McDonough advises that when setting out to plant wildflowers in your home garden, “plant a variety of species that will flower from early spring to late fall,” and “choose a variety of flower shapes and colors to support different types of pollinators.”

The accompanying chart gives plant recommendations from both McDonough and from Wendell native plants landscaper Adam Kohl of Kohl Gardens. They chose plant selections appropriate for beginning gardeners, and suited for a range of conditions. These plants are relatively easy to grow, but have a big impact for local pollinators.

Before you go out and buy plants, though, take into consideration your site conditions—sun, shade, soil saturation (is it moist or dry?) and keep these in mind when you make your plant list.

When buying plants, McDonough advises, buy sets of five to seven plants of one species at a time. Groups of odd numbers tend to be most pleasing to the eye, and “pollinators are better able to find a large swath in flower and can feed more efficiently on the abundance of flowers.” When shopping at your nursery, watch out for ‘nativars,’ or cultivars of native plants. Some plants that are marketed as natives may in fact be hybrids of different native species to produce a flashier color, a doubled, bigger or longer-lasting bloom, or other characteristics pleasing to humans—unfortunately, these changes may reduce their utility to pollinators.

“Personally,” McDonough says, “I opt for the straight species whenever possible. Most cultivars are clones, meaning they are genetically identical to one another, leaving them vulnerable to problems like disease. By choosing seed-grown plants, you ensure some level of genetic diversity.”

To ensure that you do get the straight species, read the tag carefully. If the species name (i.e Echinacea purpurea) is followed by a trademarked variety name such as Echinacea Sombrero® ‘Balsomsed’ it is a cultivar. If it has a variety name in quotes without a trademark, such as Echineacea purpurea ‘Sundown,’ it may just be a selected variety of the true native—but it may also be aggressively bred to change its color, form, or growing habit. If you want to be totally sure you’re getting the true native, look for plants with just the species name.

You can also grow natives from seed, but many are a bit more complicated than vegetables to start—they may require months of stratification (exposure to cold) or have a very long germination period. Adam Kohl seeds flats of native plants in the fall, and keeps them in an unheated space for the winter to stratify, occasionally moistening. In spring, once exposed to warmth and light, they germinate. He sells native plants plugs through his micronursery to area gardeners and lectures regularly with NOFA/Mass on native plants seed collection and propagation. You can also visit Nasami Farm (Whately) and check out Grow Native Massachusetts’ Native Plant Sale (May 30, 2020 at Waltham Fields).

To learn more about native plants landscaping, you can catch Dan Jaffe at his March 22nd workshop at the Pingree School in South Hamilton MA (sponsored by the New England Biolabs Foundation) and hear him interviewed on the March 2020 NOFA/Mass Podcast (subscribe so you don’t miss an episode!).

We usually offer a couple of education events each year on native plants, so keep an eye on our events page, and we always offer workshops on this topic at our Summer Conference and our Winter Conference. 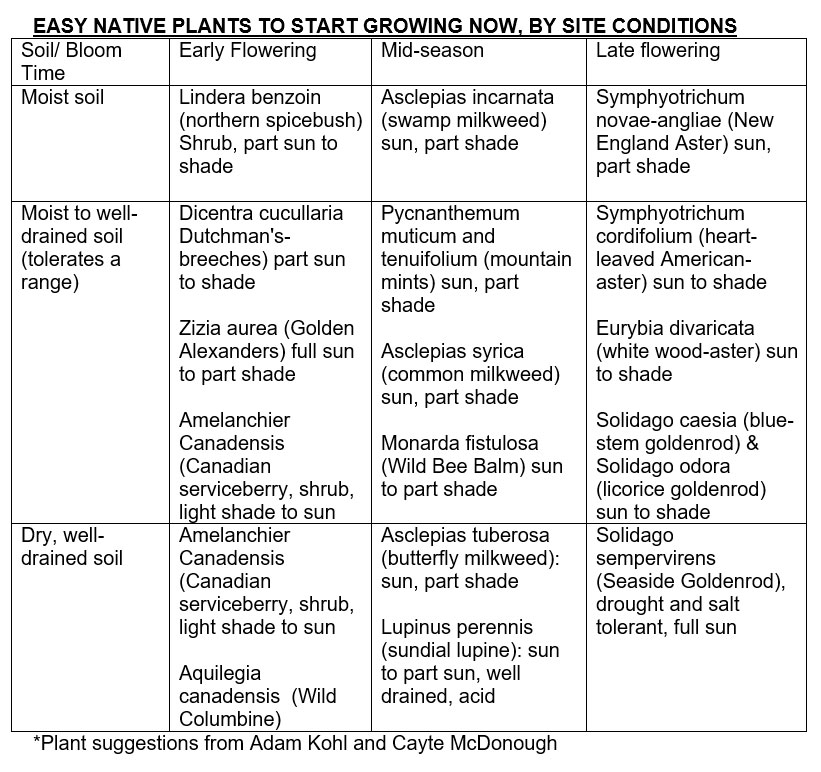