If there was a way to nurture natural systems, reverse environmental damage, and increase the health of people and animals around us, wouldn’t you want to support it?  If so, maybe you should start drinking more milk.

Dairy farmers throughout the Northeast are embracing farming methods that sequester carbon from the atmosphere and draw it into their soils, where it nourishes the diverse microbial life beneath the surface of the earth.  This enhanced microbial network just so happens to be a prime environment for low-maintenance pasture and crops to thrive, which, in turn, offers an opportunity for livestock farmers to use their land to meet the high nutritional needs of dairy cattle.

Will Rogers, of Rogers Farm in Warren, Massachusetts is following nature’s rules when it comes to managing his land and his herd of dairy cattle.  “We need to watch how nature works and mimic it.  We’re all based on biology, the food we eat needs to be grown by good biology to net a higher nutrient value food.” 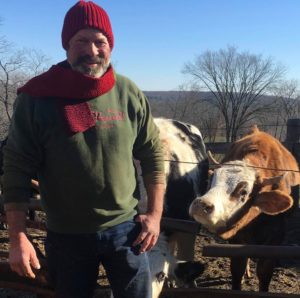 Will Rogers owns and operates Rogers Farm
in Warren, Massachusetts

Rogers rotates what he grows in his fields seasonally, growing corn in the summer months to supplement his cattle’s year-round daily rations of pasture, baleage, and purchased grain, then keeping a winter rye/crimson clover mix going throughout the cooler months as a cover crop.

The rye/clover mix is typically planted at Rogers Farm in mid-September, the same day that the corn is harvested.  A corn chopper leads this effort, cutting the corn stalks off at the base, chopping the entire plant into small pieces, and then blowing the pieces into a wagon to then be stored in a silo.  Once collected, the chopped corn will rest and ferment for at least three weeks, until it has fully “pickled”.  Corn silage is a highly digestible source of carbohydrates for ruminants, and Rogers enjoys being able to grow a good portion of his animal’s diet on his own land.

As the corn is being harvested, a no till seeder follows behind the lead machine, which drills holes into the freshly mowed field and simultaneously plants the winter rye/crimson clover cover crop.  Being a “one man show” for the most part, Will doesn’t waste any time when he’s in the field.

Planting winter rye well before the first frost in Massachusetts ensures plenty of time for it to establish roots and gain visible growth before winter hits.  Rye as a cover crop does especially well when it follows corn or other cash crops, as it has a keen ability to utilize residual soil nitrogen, decreasing the need for added fertilizer and the possibility of excess nitrates to make their way into groundwater. [citation] 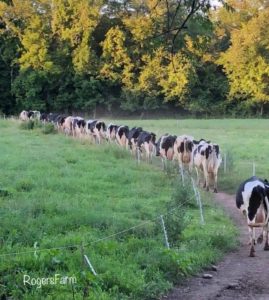 Will also plants plenty of crimson clover along with his winter rye, which acts as a nitrogen fixer that feeds the future corn plants by pulling atmospheric nitrogen into the soil.  [citation] Inter-seeding legumes like clover can significantly increase corn yields and reduce synthetic fertilizer requirements, all while improving soil health by supporting more biodiversity in the rhizosphere. [citation] In fact, Rogers’ Farm pre-seeding soil test results showed such high nitrogen levels that he didn’t need to add any fertility amendments to his fields before planting.  He has also found that he doesn’t need to use any pesticides or insecticides to grow a full crop of non-GMO corn when using no-till methods with cover crop incorporation.

Later in the spring, Rogers uses a roller/crimper to terminate the cover crop in his fields.  The resulting plant matter is left on the field as a natural mulch, benefiting the soil by controlling weeds, retaining moisture, and limiting erosion. Will spends most rainy days in early summer planting corn with a no-till drill amidst the downed rye stalks, which continue to protect the soil from moisture evaporation and flooding.  “We used to have problems with soil erosion when we grew corn conventionally and the fields would sit fallow in the winter.  The rain would wash the soil into the road or the river.”

Although cover crop seeds are an additional expense for the farm, Will believes that their role is a crucial one in maintaining the health and fertility of his land.  “There’s absolutely a positive result in the bottom line.  You see it in the health of the herd and in the health of the soil.  What we’re trying to do here when we grow food is preserve life, and there’s more life below ground than above.” 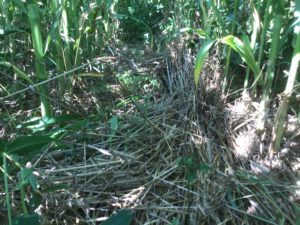 All sunny days during the summer are spent making baleage for the cows.  Although Rogers rotationally grazes his cows on pasture in the summer and fall, he still finds that he needs to supplement their feed year-round in order to meet the high nutritional demands of high-production lactating dairy cows.  He does his best to mitigate his purchased grain costs by growing the best quality forage that he possibly can.  Will finds that wrapped grass baleage can be a very nutritious source of feed, which actually mimics grain-based nutrition and can be stored into the dry season.  He interseeds his hay fields and pastures with summer annuals, sometimes with up to 12-15 different varieties at once; things like millet, sudangrass and buckwheat.

“The cows become their own medicine man” relates Rogers.  Certain cows pick at certain plants, sometimes even preferring weeds.  Their preferences differ depending on the time of year, the maturity of the plants and even the weather.  “On hot summer days they want green/leafy things.  During the cold they require more fiber and graze differently.”

Rogers also depends on his cows to fertilize the land.  When the cows are on the fields, he does not add any additional compost– “they’re already putting it out there.”  By leaving a heavy residue of grass that has been trampled and sporadic manure droppings, the cows themselves help to feed the next crop of grass.  Will composts the cow manure that comes from the dairy barn and either uses it on his own land or sells it at the farm stand. 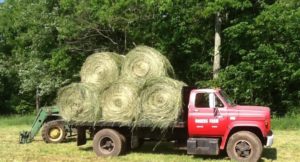 Much of the milk that Rogers Farm produces goes to a plant in West Springfield as part of Cabot cooperative.  That particular plant produces butter and other fluid milk products.  But Will retains some of his own milk to sell raw at his farm in Warren.  “There is no comparison between real, whole milk and pasteurized, skim milk that many people are used to.  There is a whole generation not in love with milk because it doesn’t taste good.”  Will not only encourages people to taste the difference, but to look at the nutrient profile of raw milk.  “The probiotic natural life and organisms in raw milk are so beneficial.”

Will and his mixed herd of dairy cattle are true caretakers of the land and their community.  “I constantly watch and learn from nature. Much of the current population has lost that connection because they are separated from where their food comes from.  They should watch and observe and think about how that relationship with nature provides for their existence.”

You can visit Rogers Farm at 2301 Southbridge Rd in Warren, Massachusetts to purchase raw milk, compost, beef and seasonal items in their self-serve farm stand, open daily from 9am-12pm and 4pm-9pm.  Follow them on Facebook for cute calf pictures and tutorials on no-till, regenerative dairy farming, or visit theorganicfoodguide.org to find a sustainable Massachusetts dairy farm near you.

For upcoming webinars and online learning opportunities about soil health, pasture management and the environmental benefits of ecological dairy operations, check out our Events page and be sure to follow our Facebook page. 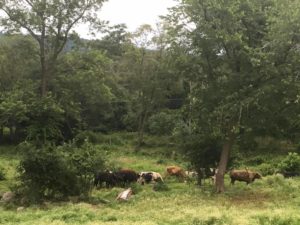