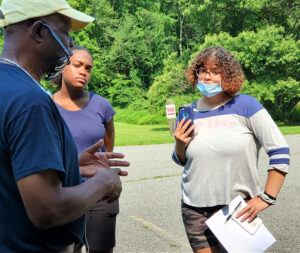 Currently there are fifteen farmers that are working on the farm. This is AARI’s fourth growing season and have added a new pop-up market to sell the vegetables they produce. The farm was started to make more of the traditional foods from their farmers’ homelands accessible to their community members. The AARI also manages seven community gardens located in Providence, RI, several of which are located in public housing areas. These areas are considered food deserts since there are few points of access for fresh, healthy food in the general vicinity. The gardens, and now the farm, provide fresh foods for the farmers, their families and the community at large. 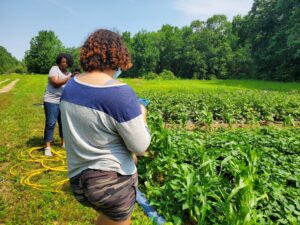 Ivanyliz checks in on the garden beds at Bami Farms

The African Alliance of Rhode Island provides everything that will make growing food successful at the community gardens, including the soils, containers, and tools they need for growing. One of the community gardens is named “Grow Your Own Food” and its purpose is to assist families with providing food for their household. Both novice growers and experienced farmers can find assistance and resources at Bami Farms.

Julius Kolawole was a gentle guide to the Youth Agricultural Scientists throughout our visit at Bami Farms. He talked about the “blue line” that acts as a temporary water system, pumping water from a nearby pond. The water line provides irrigation to all seven acres of the farm. The farmers are now working to have a buried pipe drip irrigation system.

In addition to the crops and plants growing at the farm, Julius showed the youth a hidden cemetery onsite that was used a burial ground for slaves. He did not know how many enslaved persons were buried in the cemetery, but wants to plant flowers in memorial to the enslaved persons that worked on the land. Julius found the cemetery in 2018 and told Ivanyliz, “It was one of the things that got my attention because nobody cared [that it was here]”. 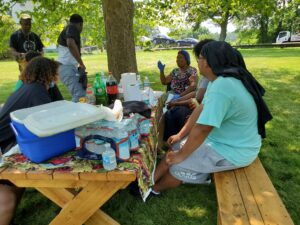 Some of the Bami Farms farmers speak with the visiting youth over lunch.

Look for more writing from the Youth Agricultural Scientists in the next NOFA/Mass Food Justice newsletter, as they talk about their experience at Bami Farms and the pop-up market in Providence.

For more information on The African Alliance/Bami Farms, or to volunteer or donate to the project, contact Julius Kolawole at jokolawole@gmail.com (http://africanallianceri.org/).