NOFA/Mass has been leading a project funded by the Massachusetts Department of Agricultural Resources (MDAR), “Correlating Healthy Soil Practices with Nutrient Quality in Carrots & Spinach” in an effort to understand the relationship between soil health and the nutrient density of crops grown by Massachusetts farmers. Over the course of this three-year project, NOFA/Mass has partnered with farmOS software and the Real Food Campaign to study farming practices and the nutrient quality in two crops, carrots and spinach. There is a wide variation in nutrient density both between different types of crops as well as within the same type of crop based upon where they are grown and the farming practices used to grow them. Overall reductions in nutrient density of fresh produce have been correlated with an increase in soil-depleting modern agricultural practices. This project has tried to capture some of these nutritional and soil management-related differences at Massachusetts farms.

Through this project, NOFA/Mass developed a cohort of ten farmers across Massachusetts to quantify the relationship between soil fertility, soil carbon sequestering practices, and nutrient density in carrots and spinach. Each of the ten participating farmers have been sending samples of carrots and spinach crops to the Bionutrient Food Association since the project’s inception, where they are analyzed for a range of nutrients, including brix, antioxidants, polyphenols, and minerals, and added to a larger database of farmers across the country. Soil samples are sent in at the same time to provide soil nutrient data, including soil organic matter, total organic carbon, soil respiration, and pH, for where the crops are grown. Finally, farmers are also submitting management and production surveys that can correlate management practices to the resultant soil and crop nutrient data. In addition to identifying the association between farming practices and crop nutrient density, NOFA/Mass also hopes this project can help educate consumers on the importance of knowing how and where their food is grown, and the impact that can have on the overall nutrition of what they’re consuming. 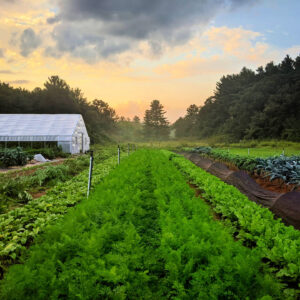 In an effort to advance consumer knowledge of local farms and farm management, NOFA/Mass has been profiling participating farmers and their farming practices throughout the duration of this project. Farmers have also been participating in outreach events, including podcasts, webinars, and on-farm events, where they discuss their farming practices and the relationship between management and nutrient density. This article profiles three project farms: Assawaga Farm in Putnam, CT, A&K Produce in Springfield, MA, and Freedom Food Farm in Raynham, MA.

Despite being over the border in northeastern Connecticut, Assawaga Farm has been participating in the project since Spring 2021, taking over for another farmer that had to leave the project. Yoko Takemura and her partner, Alex Carpenter, started Assawaga Farm in 2017 in Putnam, after converting an old hayfield into a productive ¾ acre hand-scale organic vegetable farm. With just one greenhouse, the majority of their produce is grown outdoors during the active growing season in their 100’ long garden beds. Assawaga Farm produces a diversified range of organic vegetables, with an emphasis on Japanese varieties. Speaking to Yoko’s Japanese heritage, they specialize in some Japanese varieties of eggplants and peppers, as well as some more uncommon vegetables, including burdock and shungiku.

Yoko and Alex have been utilizing soil-health related farming practices since starting Assawaga Farm. Cover crops and compost applications are key to their management, which they use to maintain a constant cover over their soil. Bed diversity, given the role it plays in building soil health, is of similarly high priority to them, and they have been experimenting with both intercropping cash crops and increasing their diversity of cover crops. Their experimental cover crop mixes include over 12 varieties of crops, some of which they

broadcast over mulch and the living plant roots of cash crops. Assawaga Farm is also experimenting with different compost application rates. They have recently started producing their own compost in contrast to getting compost from an outside source. By producing it on-farm, they are able to manage what goes into it as well as perform regular microscopic assessments to gauge its microbial activity. Doing so, they are able to maintain control over what goes into their soils and, subsequently, the impact it has on their crops.

Yoko has been aware of the variability in crop nutrients since before she started Assawaga Farm. While working at Riverbank Farm in Weston, CT, she heard a conversation from the Bionutrient Food Association regarding nutrient differences between heads of cabbage grown at different farms. This introduction early in her farming career led her to think critically about soil health and the role it plays in a vegetable’s nutrient richness. For Yoko, understanding a crop’s nutrient content is in many ways intuitive, correlating the vegetable’s vibrancy, flavor, and storage life to the health of the soil in which it grew. As a new addition to the MDAR carrots and spinach project, Assawaga Farm is still awaiting their crop nutrient density analysis results, to confirm whether Yoko’s intuitions are correct and to quantify the nutritional benefit of their regenerative farming practices.

While sharing similar farming principles and ideologies with Assawaga Farm, Freedom Food Farm, in Raynham, differs dramatically in its size and scope. At nearly 90 acres, Freedom Food Farm provides year-round certified organic production of produce, grains, eggs, honey, and pasture-raised pork, beef, and lamb. The interconnected components of their production are essential to the farm’s holistic farm management, exceeding organic standards and biodynamic principles. Chuck Currie started Freedom Food Farm in 2012 (it’s been in its current location since 2014) after spending nearly 10 years farming in Western Massachusetts and Vermont. These other experiences helped shape the farming practices he implemented when starting Freedom Food Farm. 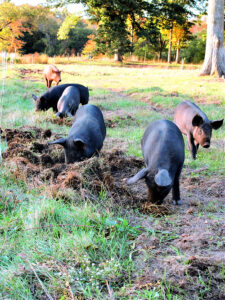 The scale of Freedom Food Farm is a key factor influencing its management. Its overall size, and the inclusion of livestock, allow for regular field rotations and an inherent fertilizer source. Chuck strives for reduced/no-till management with his field vegetables, which he maintains under regular cover crop and grazing rotation. When opening up vegetable beds, he starts with 3 years of cover crops and pasturing with his ruminant animals, including using pigs to assist with breaking up the soil prior to tilling. Beds are formed and covered with black plastic the first year, with mulch between the rows. Vegetable beds are maintained as semi-permanent beds for three years, cycling through with sweet potatoes, garlic, onions, winter squash, and brassicas, offering a diverse rotation of cash crops alternated with cover crops. The farm’s size allows for these regular vegetable garden rotations, and Chuck applies ecological knowledge and principles to considerations of soil development within and between cash crop rotations. He uses vegetables as primary successional species, initiating soil disturbances over the course of the rotation, before returning it to no-till grain crops and pasture for another 3 years with the goal of letting it rest and allowing the soil biodiversity to further develop.

Similar to Assawaga Farm, Freedom Food Farm produces their own compost, which is used on-farm to maintain soil cover and add nutrients. He is also eagerly awaiting the arrival of a cut and carry system to redistribute greenchop as mulch between his beds. In the market garden, Chuck has transitioned his previous conventional tillage system to its current no-till management, which he attributes to improvements in the taste, appearance, and overall quality of his carrots and spinach. As with most farmers, he strives for tasty, nutrient-rich produce, and he saw his participation in this project as a means to quantify the nutrient content of his crops. He also appreciates the farmer learning community that was developed between project participants, particularly given the amount of learning that can occur between farmers.

Cabbage, cauliflower and other vegetable plants in a bed at A&K Produce in Springfield, MA. Photo credit: Anna Gilbert-Muhammad.

Anna Gilbert-Muhammad, better known as Sister Anna within Springfield and the NOFA/Mass community, is well known for her essential role with groups working with food access issues and in the many roles she plays at NOFA/Mass, including Equity Director, Soil Tech Advisor, and Food Access Coordinator. By contrast, her home garden is less well known. Anna and her husband have established a ¼ acre garden in their Springfield backyard to effectively grow what they eat year-round and sell the extra they don’t consume. They grow an extensive assortment of produce, which includes cucumbers, eggplant, over 8 varieties of tomatoes, strawberries, cabbage, cauliflower, Swiss chard, lettuce, summer and patty pan squash, watermelon, cantaloupe, calabasa squash, rhubarb, raspberries, several varieties of hot peppers, several varieties of herbs, and flowers for pollinators. She relies heavily upon preserving, making salsa, pickling cucumbers and tomatoes, and dehydrating ghost peppers and cayenne for herbal and medicinal use.

Anna utilizes biointensive practices, working to maximize yields within her garden space while emphasizing soil health and fertility. She forms her raised garden beds through double digging, digging them twice in order to raise the soil and then incorporate compost, which is less intrusive than tilling and faster than laying cardboard to kill off the grass. Upon establishment, she uses cover crops, mulch, and compost to maintain constant soil cover and keep disturbances to a minimum. Despite her small scale, Anna has been experimenting with cover crops, including hairy vetch, white clover, winter rye (which she doesn’t recommend at this scale), and others that can also serve as food crops, such as sugar snap peas. Anna finds that constant mulching, even in the winter, has yielded soft soils that are easy to plant into in the spring. Following these biointensive practices, Anna has observed an increase in earthworms and has quantified increases in soil carbon using a microbiometer. She’s correlated these gardening practices with better tasting, more nutritious food.

A self-identified “true city slicker”, Anna first tried her hand at gardening 10 years ago, when she learned how to make everything green and grow well. Her involvement in this project is related to her concern over the nutrient content of her produce, which was largely spurred by reading Steve Solomon’s book, The Intelligent Gardener. Anna attributes her marked increases in production to her biointensive gardening practices and paying attention to the soil with all 5 senses. Knowing the role a home garden can play in easing a family’s food budget while providing a healthy resource of nutritious food, Anna is excited to share her lessons from this project and the correlations between her biointensive gardening practices and carrot and spinach nutrient density with her neighbors and the NOFA/Mass community.

Set to conclude at the end of September 2021, this MDAR-funded carrots and spinach nutrient density analysis project is in its final month. Participating farmers are sending in their final carrot samples to the Bionutrient Food Association for analysis this fall. Final results and conclusions from the project will be summarized in the NOFA/Mass newsletter and in The Natural Farmer in late 2021 or early 2022.