Neighboring Food Co-op Association has been a Silver level sponsor of NOFA/Mass since 2012 and has greatly supported our work of educating about and advocating for organic agriculture in Massachusetts.  Thank you!

As food co-ops continue to grow across the Northeast, they also contribute to more resilient communities — which is just what we need as we work together to build a more inclusive food system and economy.

In the wake of the Great Recession of 2008, there was a lot of talk about what was wrong with the economy, how unsustainable and unequal it had become, and how it had left so many vulnerable.  Interest in co-ops grew dramatically, as it often does during economic crises, as many people considered how we might rebuild in a more just, sustainable, and resilient manner.

In the decade following the financial crisis, food co-ops across the Northeast grew as people sought out alternatives.  For example, a survey in 2018 by the Neighboring Food Co-op Association (NFCA) revealed that our founding co-ops grew almost 40% in shared revenue and membership since the recession. And while a few food co-ops have closed, existing co-ops have expanded to additional locations and at least five new ones opened their doors. This growth has enabled our co-ops to support more local producers, provide greater employment, grow community ownership, and build more resilient local economies. 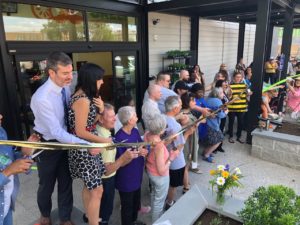 Urban Greens Food Co-op in Providence RI opened their doors in 2019 with community enthusiasm and a dedication to representing the communities they serve.

Urban Greens Food Co-op in Providence RI opened their doors in 2019 with community enthusiasm and a dedication to representing the communities they serve.

At the same time, control of the food system has become more concentrated while economic inequality has grown dramatically.  The COVID-19 Pandemic has exposed the consequences of these trends, as working people and communities of color have suffered the most severe consequences of the virus and the economic downturn that has resulted.  Unemployment has reached Great Depression levels, millions of small businesses are at risk of closing permanently,[1]  and recent forecasts predict a new wave of family farm foreclosures, devastating rural economies. And, the murder of George Floyd and ongoing police violence has prompted urgent and powerful calls to address racial injustice across our society and its institutions. As people come together to build a more just and sustainable future, how can we work to ensure that this future is more resilient? 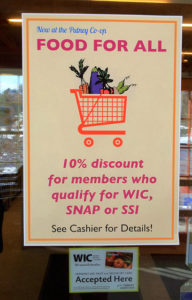 Co-operative businesses have been part of the social and economic fabric of our country since its beginnings, and today 1 in 3 people are members of at least one co-op.[2] Still, we don’t learn about this movement in school and co-ops are generally overlooked in colleges and universities.  Most of us are unaware of the inspiring history of co-operative organizing among family farmers, working people, and communities of color to overcome the economic inequality and the inequities of their times.  How can our food co-ops communicate their difference as we work to continue to serve our communities, providing them with safe, healthy food, and rebuild from the pandemic while re-doubling our efforts to be more inclusive of our communities?

Key to launching a new food co-op and ensuring its success over the long haul is community education.  Our work with startups reminds us of how co-operatives build power with limited resources, enabling people to build up the skills and assets of their local communities. Food co-op organizing is community organizing, bringing people together to identify mutual needs and create solutions, together. And this work of member engagement continues once the food co-op opens its doors, ensuring strong connections to the community.

Annually NFCA host representatives from regional startup food co-ops gather to share information, support each other and learn organizing tools to build a co-op in their community.

Annually NFCA host representatives from regional startup food co-ops gather to share information, support each other and learn organizing tools to build a co-op in their community.

One of the more powerful things about the co-operative model is its ability to pool small amounts of resources for big impact. For example, the average cost of membership in a food co-op is about $150, but the average revenue of our food co-ops is nearly $12 million — and together, our Neighboring Food Co-ops have a dramatic impact on the regional food system and economy, generating more than $347 million in shared revenue.

This low threshold for membership and participation also means that food co-ops help build a more inclusive economy through broad community ownership. Across our region, 150,000 people from all walks of life – working people, professionals, and small business owners – are members of our 29 food co-ops and 10 startups. As we work to build food security through community ownership, our co-ops are sharing models for ensuring access to membership for people on limited incomes. 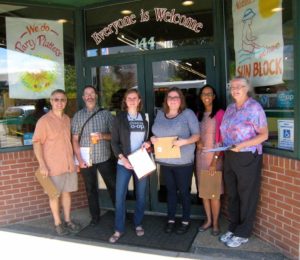 As people-based enterprises, co-ops are democratically governed on the basis of one member, one vote, rather than how many shares you may own. Perhaps not surprisingly, almost 65% of our food co-op boards of directors are women and half are under 50 (compared to 19% women and 3% under 45 on S&P 500 Boards).[3] At the same time, food co-ops are working to be more representative of their communities, challenging themselves on issues of diversity, equity, and inclusion.

Co-ops prioritize meeting the needs of their members and communities — the people who use the business — rather than maximizing financial returns for owners or investors. This means they can focus on other priorities, like good jobs and building a sustainable food system.  The pandemic has sparked a new level of interest in local food for a variety of reasons including perceptions of safety, shorter and more reliable supply chains, and supporting local businesses. With local baked into our relationships, co-ops are well positioned to meet this demand and play a key role in helping our communities rebuild, and rebuild better. For example, in 2019 our member co-ops sold nearly $94 million in local products with the average food co-op purchasing from 250 local suppliers. Local sales comprised an average of 30% of total revenue for our food co-ops, compared with the national grocery store average of just 1.8%.[4] While purchasing from a wide variety of suppliers is less efficient and increases costs, it also contributes to a more sustainable, diverse, and resilient economic web. 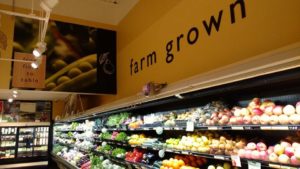 Food co-ops have also been leaders in growing the market for organic farmers. Last year, our member co-ops sold $97 million in organic products, reporting an average of 34% of store sales (compared with a national grocery store average of just 5%).[5] Organic agriculture not only supports the health of consumers, workers, and our environment, but has been recognized by the United Nations Food and Agriculture Organization as a key tool in combatting the impacts of climate change by increasing soil health, capturing and storing more carbon in the soil, and reducing the use of fossil fuels and the release of greenhouse gases.

Co-op members also use their purchasing power to support and empower other communities though co-operative development and Fair Trade. For example, member co-ops sold an estimated $14 million in fairly traded products last year, and $18 million in products from farmer, worker and other co-operatives. In collaboration with the Federation of Southern Cooperatives, we are exploring how we can be partners with Black farmers in strengthening land ownership and challenging historic racism in the food system.

This brings us back to how food co-ops help build more resilient economic infrastructure. While organizing a successful food co-op takes time, our average member co-op has been in business for more than 30 years — with two co-ops celebrating more than 75 years in operation. Food security is a challenge for both rural and urban communities as retail grocery store chains continue to consolidate.  Food co-ops anchor wealth and resources in the community because profits stay local, rather than being transferred to outside investors. Their emphasis on buying local supports small business and sustains local economic activity. They are also very unlikely to leave the community because they are owned by the people they serve, and because they are democratically governed they are very difficult to buy out.

Harvesting sweet potatoes on a Federation of Southern Cooperatives farm. The Federation’s mission includes working to save, protect and expand the landholdings of Black family farmers in the South.

Finally, co-ops work together to support one another and their communities, especially at times of crisis. By supporting shared growth, innovation, and success, the Neighboring Food Co-op Association enables our member co-ops

to increase their collective impact and build a more healthy, just, and sustainable food system. Through collaboration with organizations such as Deep Root Organic Co-op, Organic Valley Cooperative, the Federation of Southern Cooperatives, the New England Farmers Union, and the Valley Alliance of Worker Co-ops, we are growing the co-operative economy in our region.  And of course, through our partnership with NOFA/Mass we support education and advocacy promoting organic agriculture and the availability of nutritious food from living soil for the health of individuals, communities and the planet.

Your local food co-op is more than a grocery store.  It is a community asset, owned by the people who use it to meet their shared needs. Working together, food co-ops create benefits that ripple out across our region and around the world. From food co-ops to farmer co-ops, worker co-ops to credit unions, and housing co-ops to energy co-ops, our collective impact is even stronger, providing a glimpse of a co-operative economy that is more humane, resilient, sustainable, and inclusive.

As we rebuild, let’s rebuild co-operatively.

Erbin Crowell serves as Executive Director of the Neighboring Food Co-op Association and Chair of the Board of Directors of the National Cooperative Business Association.

[4] “You are the Co-op Difference,” retrieved from http://www.welcometothetable.coop/article/you-are-co-op-difference.

[5] “You are the Co-op Difference,” retrieved from http://www.welcometothetable.coop/article/you-are-co-op-difference.