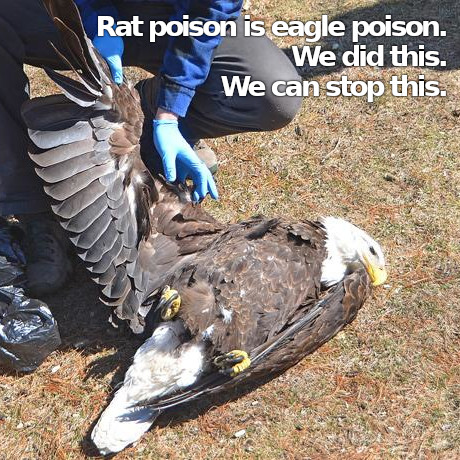 A female bald eagle found dead in her nest on the Charles River in March suffered a fatal hemorrhage after consuming smaller animals who had themselves consumed rat poison, as confirmed recently by MassWildlife officials. This is the first confirmed case of such poisoning in Massachusetts and evokes a clarion call to rein in pesticides use in our Commonwealth.

NOFA/Mass is partnering with several other nature-defending organizations to cosponsor late-file legislation, sponsored by Representative Jim Hawkins, to decrease the use of rat poisons in the state, promote integrated pest management (IPM) and modernize pesticide use tracking.

According to information presented by Raptors Are the Solution (RATS):

“Most rat poisons kill more than rats—they also pose a fatal threat to birds of prey…. This issue should not only get attention when a culturally iconic species like a Bald Eagle dies. Nearly every raptor species is vulnerable to rodenticide poisoning, from Eastern Screech-Owls to Red-tailed Hawks.” -MassAudubon (“Rat Poison Is Killing Birds Of Prey, And People Are Finally Paying Attention”)

The Charles River eagle was the victim of second-generation anticoagulant rodenticide (SGAR) poisoning. As explained further by MassAudubon:

“Second-generation anticoagulants don’t kill rodents immediately. While these rodenticides can kill rats with a single dose (which is why many consumers prefer them), poisoned rats can still live for a few days and continue eating poisoned bait. This delay means that rats can ingest enough poison to kill a much larger animal by the time they finally succumb. While any rodenticide can kill a raptor, second-generation anticoagulants are the most dangerous.”

While personal use of these second-generation anticoagulants (SGARS) is already banned in MA, licensed pest companies can still use it when hired to deal with rodent problems.

Proposed legislation, HD.4206, “An Act relative to pesticides,” would do more than protect raptors like bald eagles. It could go a long way to reducing pesticides use across the Commonwealth. This bill would:

Please contact your legislators today to ask them to cosponsor HD.4206, “An Act relative to pesticides,” and share this article with your networks.

“Integrated Pest Management” (IPM) is an “ecosystem-based strategy” which focuses on long-term prevention of pests through such techniques as biological control, habitat manipulation and modification of cultural practices. (To be clear, IPM may still include toxic pesticides as a “last resort…”)

“The struggle to control mice and rats is usually viewed in terms of humans vs. rodents, but wildlife such as birds of prey are often not recognized as players in this battle,” said Dr. Maureen Murray, Director of Tufts Wildlife Clinic. “Many people are surprised to learn that the mouse poison they use in their basement can also kill the great horned owl hooting in the neighborhood.”

From MassAudubon:  (Don’t) pick your poison