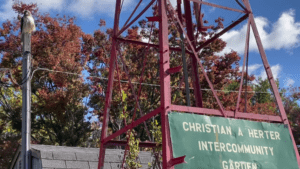 An old water tower welcomes visitors to the Christrian A Herter “Intercommunity” Garden, with a red-tailed hawk on watch for rodents (Photo credit: Damon Krukowski)

HERTER PARK, BRIGHTON – In days following the revelation that the Department of Conservation & Recreation (DCR) plans to remove the Herter Community Garden from its historic location on the Charles River in Brighton, garden members have mobilized resistance to this aspect of the “Master Plan” for Herter Park. In the span of 36 hours, a petition calling for the DCR to leave Herter Community Garden where it is garnered more than 2000 signatures. Advocates hope that the existing community garden, which started in 1976, will be centered in the final “Master Plan” for Herter Park, rather than being “consolidated” adjacent to another garden a quarter mile away. On October 20th, the stated deadline for public comment, DCR announced that it will extend the comment period to October 29th, 2021 (link to submit comments).

See the Youtube Video featuring voices of the gardeners (Oct. 18, 2021)

Still image from a video released on October 18th, 2021, featuring voices of gardeners objecting to the removal of the garden from its current location (Photo credit: Damon Krukowski)

“This garden is a cultural gem of historical importance. It has much to offer to current and future generations about community, self-reliance, cooperation and our relationship to the natural world,” wrote Greg Watson, former Commissioner of Agriculture in Massachusetts, in his comments to DCR. “I urge DCR to reconsider its plan (as well-intentioned as it may be) to destroy this invaluable resource,” Watson commented.

Founded in 1976, The Herter Community Garden includes approximately 70 plots on 0.35 acres and sits alongside the Charles RIver in Herter Park, Brighton. According to advocates, the garden has long been a hub of organic urban community gardening for almost half a century and is relied upon by local immigrant communities.

“It’s impossible to ‘move’ this community garden: 45 years of soil building, the perennials, the paths, the trellises, the relationships with the land,” remarked Brent Whelan, a member of the Herter Community Garden. “The garden could only be destroyed and hopefully recreated, but it wouldn’t be the same community garden and beds like we have now take years to establish. Many of our older community members have expressed that they would not be able to make the move,” Whelan added.

Still image from a video released on October 18th, 2021, featuring voices of gardeners objecting to the removal of the garden from its current location (Photo credit: Damon Krukowski)

The plan to remove the garden was disclosed during a 90 minute public meeting hosted by DCR on Zoom on September 29, 2021, during which contractors spent 2 minutes discussing the Herter Community Garden (video, here). DCR contractors explained how turning the existing community garden into a “picnic lawn” would provide “an expansive view of the river.” The Head of the Charles Regatta, which occurs this weekend, is commonly viewed from this section of the park.

The plan proposes the creation of a new community garden in a spot adjacent to an existing one, about a quarter mile up river. Advocates point out that the proposed expansion site is “sloped, wooded, with poor drainage and depleted soil.” and is rife with opportunistic (aka “invasive”) plant species, which will most likely be managed with synthetic herbicides. 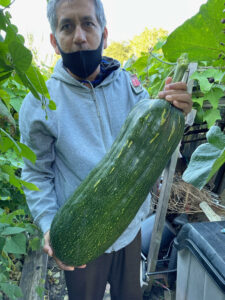 The Herter Community Garden is centrally located in the park near the main parking area and walking paths, thus forming a prominent attraction for many park visitors who engage with the plantings and gardeners and learn about urban food resiliency and pollinator protection at an established pollinator garden. In contrast, the proposed site is isolated, largely obscured, and remote from other activities, advocates say.

Mr. Whelan continued, “The Herter community gardeners are a vulnerable community of largely older gardeners, many of them immigrants and People of Color with limited English skills and few resources. These stakeholders were not adequately engaged in the planning process for this ‘Master Plan,’ with many only becoming aware of the plan in recent days.” 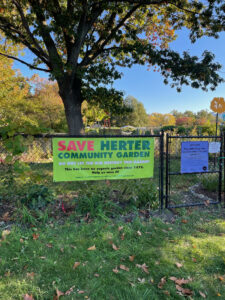 A banner on the gate of the garden reads “Save Herter Community Garden – Do Not Let the DCR Destroy This Garden” (Photo credit: Damon Krukowski)

“The proposed plan would tear apart both the garden itself and the web of community and sociability that have characterized it for all these years, “ added Marty Dagoberto, Policy Director for the Massachusetts Chapter of the Northeast Organic Farming Association (NOFA/Mass). “In a time of food insecurity and climate destabilization we should be expanding community gardens, not “consolidating” them,” Dagoberto remarked.

Herter Community Garden is an organic community garden located along the Charles River in Allston-Brighton, MA. We’ve served as a communal gardening space since 1976. Today, a diverse group of individuals and families maintain almost 70 plots where they grow flowers and fresh produce to enjoy at home.

NOFA/Mass is a member-based nonprofit that represents sustainable farmers, gardeners, and organic consumers across the state. We are primarily an educational organization committed to deep organic and agroecological practices, social justice, and healthy communities. Since 1982 NOFA/Mass has been working to expand the production and availability of nutritious food from living soil for the health of individuals, communities and the planet.