A decade ago Mike interned with the Radix Center, where he first met Scott Kellogg and spent many mornings hauling food scraps for Radix’s Community Compost Initiative in the back of his Honda Civic.

Author Scott Kellogg isn’t a stranger to us at NOFA/Mass. Perhaps you attended his 2020 NOFA Summer Conference presentation, Urban Soils & Eco Justice. He is also no stranger to the intersection of the theoretical and the practical. His own lived experience combines a PhD from Rensselaer Polytechnic Institute and years of teaching in graduate and undergraduate programs in universities throughout the Northeast with decades of work “on the ground” in urban sustainability. Kellogg first cofounded the Rhizome Collective in Austin, Texas, which functioned from 2000-2009, and later the Radix Ecological Sustainability Center, a non-profit organization that serves as a “functioning urban environmental education center consisting of a one-acre farm containing a solar greenhouse, microlivestock, aquaponics, bees, gardens, perennial food forest, composting operation, and more” in Albany, New York, where he continues to serve as Educational Director. The Radix Center conducts educational programming and site demonstrations for community members of all ages, with a particular focus on youth. 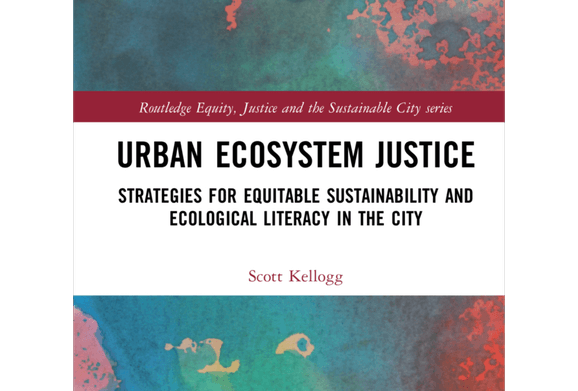 This combination of urban farming and gardening, youth education and leadership, and restoring health to urban soils shares many connections with the work NOFA/Mass is engaged with through our on the ground programming in Springfield, MA. In Urban Ecosystem Justice: Strategies for Equitable Sustainability and Ecological Literacy in the City, out this year from academic publisher Routledge, Kellogg brings together rigorous academic study with a hands-on toolkit, delivering a highly effective guide for how we might move forward together toward more equitable, just, and sustainable cities, both in theory and in practice.

In introducing readers to the concept of urban ecosystem justice, Kellogg first explains two foundational ideas. The first is social sustainability exclusion, wherein the environmental and economic aspects of sustainability are emphasized while the social aspects are de-emphasized, in order to make the discourse of sustainability more attractive to capital-conscious business leaders and policymakers. The second is ecological alienation, wherein the simultaneous separation of urban and rural communities and willful rendering as inaccessible or undesirable most remaining urban ecologies, coalesce to instill fear of ecological systems in urban-dwelling people of all ages. These, Kellogg explains, are the central problems that urban ecosystem justice attempts to address. Simply put, he writes, “urban ecosystem justice looks at how questions of equity, access, fairness, race, and class apply to the biophysical dimensions of urban ecosystems (soil, water, waste, air, biodiversity).”

The theoretical and the practical are separated into two distinct parts in Kellogg’s book. Part one lays out an intellectual foundation for understanding both the causes and the potential solutions of the problems explained. Helpfully, so that we might begin to understand where the concept of urban ecosystem justice fits among more established concepts, Kellogg includes the note that, “in many ways, urban ecosystem justice can be thought of as an outgrowth of environmental justice that expands its area of focus to include the biophysical components of the urban ecosystem.” Throughout this section, Kellogg weaves through histories and emergence stories of various realities, both ecological and political. These are the stories and ideas that, together, make up what he refers to as the “‘chaotic bricolage’ that comprise the urban ecosystem justice mosaic.”

In part two of the book, Kellogg begins to dive into the practical applications and tools we might seek to use in striving for urban ecosystem justice in our own communities, whether here in Massachusetts cities large and small, or anywhere else in the world. This section is separated practically into five biophysical sections: urban soil justice, urban waters justice, urban atmospheric justice, urban compost justice, and urban biodiversity justice.

Here, Kellogg expands upon the reasons each of these dimensions are ecologically crucial. For readers generally familiar with the importance of soil health, and those specifically familiar with the NOFA/Mass urban soils bioremediation project currently in its third year in Springfield, MA, the urban soil justice section should sound familiar:

Living soils are resilient soils. From growing nutritious food, to purifying water, and for absorbing carbon from the atmosphere, healthy soils are critical for the survival of humanity. Urban soils, however, have been widely abused. Paved over, compacted, degraded, and poisoned, the poor condition of urban soils is a significant limiting factor to achieving urban ecosystem justice. Considering this, it comes as no surprise then when many urban residents aren’t aware of the difference between living soil and lifeless dirt. 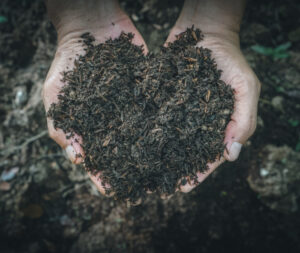 Indeed, if we understand that healthy soils are necessary for human life, we must also understand that the willful destruction of urban soils paired with the continued ecological alienation of urban residents represents a deep injustice. This is where the creation and sharing of tools and resources that empower communities and individuals to rewrite the story of the soils in their own cities can be so powerful. As Kellogg continues:

One of the most important objectives of urban ecosystem justice is to teach the public to appreciate the amazing biological richness, complexity, and value of living soil: providing them with a tool kit of skills useful for building soil where there is none, revitalizing it when it is damaged, and detoxifying it when it is contaminated.

Kellogg goes on to provide anecdotes about, and tools for dealing with, concrete and asphalt surfaces, relieving soil compaction, re-introducing soil microorganisms, protecting communities from pollutants and contaminants, detoxifying urban soils, best practices for risk-reduction when it comes to working around contaminated soils, and more. There are also instructions for creating tools that serve a purpose in hands-on teaching and learning about the concepts under consideration. For instance, after thoroughly explaining the safety concerns and risks involved with bioremediation, Kellogg provides instructions for, “setting up a small-scale mealworm polystyrene digester…that can be used to demonstrate the principles of biologically assisted degradation of synthetic polymers.” The plainly written directions include what you’ll need (“one cup of mealworms…” and so on), what to do, and alterations you can make to perform an advanced version of the experiment.

Each of the biophysically organized chapters in this section is delivered in this same way. In the chapter on waters, you can learn how to build an artificial floating island for river remediation. In the atmospheric justice chapter, there is a description of how urban communities can employ evergreen shrubs and vine-covered fences as “vegetative depositional barriers” that “block and trap airborne particulates” from reaching vulnerable areas, such as gardens or playgrounds located near air pollution sources. In the chapter on compost, you’ll find notes on the possibilities of community composting through food scrap collection, made richer by the details and experiences included from the Radix Center’s very own Community Compost Initiative.

And it is to the Radix Center’s example, or as Kellogg calls it here, “the radix experiment” that he turns for the book’s third and final section on urban ecosystem pedagogy. He writes:

Since its beginning in 2010, Radix has maintained a demonstration site of sustainable tools and technologies that are designed to teach local residents, with a special emphasis on youth, ways to have more local access and control over essential resources such as food, water, energy production, and waste management. By doing so, Radix hopes to empower citizens with the knowledge, tools, and technologies necessary for replicating these systems in their own homes and communities, with the larger goal of promoting a city overall that is more just, healthy, and resilient in both its social and ecological dimensions. Radix seeks, through its advocacy, pedagogy, and practice, to explicitly recenter the social pillar of sustainability, demonstrating how issues of equity, access, fairness, and justice pertain to matters such as food, climate, soils, water, air, waste, and non-human life.

In concluding this section and the book as a whole, Kellogg brings home the idea that studying both the theory and the practice are key to understanding and building urban ecosystem justice. Of his concurrent work at Radix and pursuit of a doctoral degree, he writes, “creating Radix has, in effect, been ‘building the ship I wish to study’; in order to study urban ecosystem justice in an engaged, direct, and embodied way, it has been necessary to immerse myself in the process of creating it.” Now, thanks to this thorough look at the ‘chaotic bricolage’ of theoretical concepts underpinning the concept of urban ecosystem justice paired with equally thorough instructions for practical DIY and community-based tools and projects for achieving it, we can immerse ourselves in that process, too.

If you are interested in receiving a free digital copy of Urban Ecosystem Justice, contact Scott directly at sk@radixcenter.org.