Will our Commonwealth support protections against Chemical Trespass?

Home/Newsletters/Will our Commonwealth support protections against Chemical Trespass?
Previous Next

Will our Commonwealth support protections against Chemical Trespass?

Last month, we reported with excitement and gratitude that the state’s legislative committee on the Environment and Agriculture approved several pesticide reform measures. We’d like to focus this month on one bill and particularly on the corresponding concept which is finally getting some of the attention it deserves, a bill regarding the issue of chemical trespass. We need your help to make sure your legislators understand this concept:

We declare our right to live free of chemical trespass!

“It is an inviolate, fundamental, and inalienable right of every person residing within any given community to be free from invasions of their bodies by corporate chemicals… The concept of chemical trespass places the burden of proof and liability on the polluter, no matter where the pollution is emanating from. In this way, ‘chemical trespass’ transcends conventional notions of ‘jurisdiction’ and private property ‘rights’ to pollute.”

“An Act providing for protections from chemical trespass in the Commonwealth” (S.555/H.1001), filed by Rep. Lindsay Sabadosa and Senator Adam Hinds), prohibits the application of agricultural pesticides within a one mile buffer zone around residences, medical facilities, schools, parks and playgrounds. It requires posted notice when pesticides are applied next to a buffer zone, requires a transparent complaint process and provides for penalties for violations, including suspension of pesticide applicator licenses and certifications.

“This legislation was driven by constituent input into policy that they felt would protect them from the harmful side effects of pesticide use, and it is rooted in the belief that innocent bystanders should not be the victims of dangerous pesticide use,” said Representative Lindsay Sabadosa (pictured left) in response to the advancement of the bill in February 2022. She continued, “Much like we have recognized second-hand smoke is dangerous, so too should we recognize that those who live near areas of excessive pesticide use are dealing with chemicals that cause both short and long-term adverse health effects.”

Please take a moment to contact your legislators. Express your gratitude that the Environment/Agriculture Committee approved this bill and make sure they understand the importance of protecting our homes and families from Chemical Trespass!

Barbara Pelissier, of Westhampton, is one constituent who initially brought the issue to the attention of her state representative.

“I inhaled a lung full of some unknown chemical one morning in 2018 when I walked out of my house and down to my mailbox. A severe coughing fit overtook me. I looked back toward my house and saw a white fog. Then I saw the farmer who grows vegetables 45 feet from my property line driving away in a closed-cab tractor, wearing a respirator,” Barbara recounted. Her son was later subjected to a similar exposure. She and her son had to leave the property in order to get clean air and recover from coughing, she said. 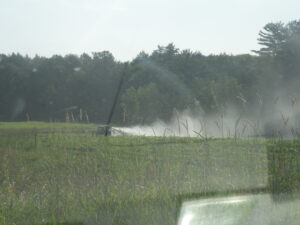 “Would you want to walk into that drift? Apparently, I did!” Barbara Pelissier, of Westhampton, who provided this photo.

Multiple attempts through the proper authorities to learn what she was exposed to and to at least receive notice before future spray events have been unsuccessful. When she inquired with the Department of Agricultural Resources to find out what pesticides were being sprayed next to her house, she was invited to come to the office and pour through boxes of printed records to find out. The state does not digitize this information by default, confounding efforts toward accountability and transparency. This is why we are also supporting a related bill as a high priority: Rep. Hawkins “An Act relative to pesticides,” H.3991, which would modernize pesticide reporting in our Commonwealth. (You can learn about this bill and others on our policy page.)

Contact your legislators to encourage them to keep these pesticide reform bills moving toward a vote of the full legislature before the session ends in July 2022!

Every child in our society is born with a “chemical body burden” which is passed from parent to child during pregnancy. This burden will likely grow with the child as they encounter an ever increasing diversity of synthetic chemicals present in food, air, water and everyday consumer products. According to a study published in the journal Environmental Research in June 2021, gestating parents living within 2.5 miles of agricultural pesticide applications have an increased risk that their child will develop central nervous system (CNS) tumors. This study is particularly concerning as it reveals that individuals do not have to be in close contact with pesticides for risky, health-harming exposures to occur. (Read more about that study, here). This is just one recent example of science demonstrating the potential impact of chemical trespass on our health. Our partners at Beyond Pesticides maintain a sobering database of pesticide-induced diseases, examining the reality of “body burden.”

Any efforts to regulate the use of pesticides in our Commonwealth, especially when it comes to agriculture, are met with stark opposition by the chemical lobby and some conventional farmers. Despite widespread public support, it took 7 years of relentless campaigning, tens of thousands of constituent calls and emails, multiple packed legislative hearings and negotiations with trade groups before we saw the final approval of a moderate measure to eliminate consumer use of the pollinator-killing class of pesticides known as neonicotinoids, which goes into effect this July. Unfortunately, this hard-won half-measure does nothing to address the reality that agriculture today is 48 times more toxic to insect biodiversity than it was 30 years ago, due in large part to the increased use of neonicotinoids (which are set to be reapproved by the EPA for another 15 years…despite being banned in Europe 😡).

We fully recognize that if the legislature were to pass this bill in its current form it would disrupt the current form of agriculture in our Commonwealth. This speaks not to a problem with the bill, but to a problem with mainstream farming practices. We must ask: Should we not be able to protect our families, homes, hospitals, schools, childcare centers and playgrounds from pesticide drift? Why are we so reliant on life-killing compounds to grow our food, in the first place? We know, many of us first hand, that we can grow abundant, nutrient-dense food without toxic inputs, but we must, as a society, make a conscious decision to do so. 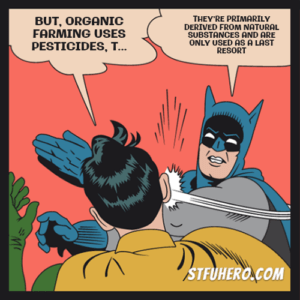 We hear this industry argument all the time. Slap down these “alternative facts” when you hear them.

Yes, organic farmers use pesticides sometimes, “but such products are primarily derived from natural substances, go through a strict regulatory approval process to ensure they are not harmful to the environment and human health and are only allowed to be used when other pest control methods aren’t successful.” We hear this industry argument all the time. Slap down these “alternative facts” when you hear them. (Read more, here: Debunking ‘Alternative Facts’ About Pesticides and Organic Farming) Note also that the buffer zone restrictions proposed in S.555/H.1001 do not impact “minimum risk” (FIFRA exempt) pesticides, including those derived from natural substances like clove and cinnamon oil.

Farmers are victims of an exploitative economic system which prioritizes profits over community and ecosystem health, and they have been sold the so-called “Green Revolution” by the chemical corporations: it’s not their fault. We can and must provide for a “just transition” for our farmers away from the chemical-dependent paradigm and toward regenerative, agroecological, life-sustaining forms of agriculture. Farmers and farmworkers do not want to be applying these toxins and polluting our communities, they’re just trying to feed us and survive as farms! NOFA/Mass will continue to help farmers increase productivity and climate resilience while stepping off of the chemical treadmill and we will continue to advance consumer demand for pesticide-free food.  (“Just transition,” explained.)

We are hoping that with the advancement of the Chemical Trespass bill (S.555, H.1001), the chemical lobby and those who perpetuate our food system’s reliance on toxic pesticides will be motivated to work with legislators and regulators on a pragmatic and aggressive approach to reducing our over-reliance on and exposure to pesticides. We hope that the concept of “chemical trespass” will enter further into public discourse so that we can better organize to reclaim control over our bodies and our homes.