Caring for Your Soil: Understanding Soil Aggregation and Compaction

Home/Newsletters/Caring for Your Soil: Understanding Soil Aggregation and Compaction
Previous Next

Caring for Your Soil: Understanding Soil Aggregation and Compaction

I’m frequently telling my kids, “you get what you get and you don’t get upset.” With soil, however, you get what you get and you can learn how to deliberately make it better. Soil aggregation and compaction are two key competing components of healthy, productive soils, yet maintaining soil aggregates and banishing compaction requires time and proper management. Well-managed soil develops into clusters, called aggregates, of varying sizes and strengths that can help build the foundation for the network of pores and channels that allow roots, soil dwellers, air, and water to infiltrate easily. Soil aggregates are responsible for establishing a soil’s structure, resiliency, productivity and are generally best when big, abundant, and strong. Developing and maintaining strong soil aggregates is considered one of the more difficult facets of soil management, but it’s also one of the most important due to the control they exert over everything that goes on in the ground.

Soil aggregation develops through a combination of biological, physical, and chemical processes within soils. Some of the aspects contributing to soil aggregation are out of your control, such as soil type (sandy soils have a looser structure and are less likely to aggregate than soils with a lot of clay, more about this later), but you can directly control most other aspects through management. Soil type regulates the physical and chemical components available for aggregation through the soil’s clay content. Clay particles are negatively charged, causing them to attract or repel other charged particles in the soil, including other soil particles, fertilizers, and elements such as iron, sodium, magnesium, and calcium. Aggregation resulting from biology is dominated by the movement of earthworms and other soil dwellers through the soil, and sticky glues released by roots, bacteria, and fungi as they make their way through the soil. What you put into your soil and how you treat it directly impacts the ability for these living beneficials to thrive and develop aggregates.

Strong, well-formed soil aggregates develop over time through careful soil management. Additions of organic matter through compost, mulch, and cover cropping provide carbon and fuel for soil microbes and earthworms to simultaneously develop their communities and help them help your soil. Similarly, the growth of roots created by maintaining a constant living cover helps move the soil around, causing soil particles to attract and aggregate while also releasing the beneficial glues that help them stay together. Practices that encourage these organic inputs, as well as increasing the diversity of plants, can increase the subsurface ecological diversity and the formation and strength of soil aggregates. Minimizing tillage is also essential to the development of aggregates: aggregates are damaged or destroyed every time a field is tilled, setting aggregate formation back to zero. Soils with the strongest and most abundant aggregates are typically in permanent beds or infrequently tilled and receive regular organic inputs. 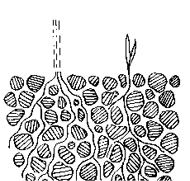 Well-aggregated soil provides the structure that can allow water, air, roots, and beneficial microorganisms to easily penetrate and move around. Image credit

In contrast to the wide-ranging benefits provided by soil aggregates, soil that is without structure and channels for air, water, roots, and soil dwellers is likely compacted. Compaction can occur in response to any load or pressure on a soil, ranging from human and livestock foot traffic to heavy machinery use, that ultimately compresses the soil into a smaller total volume. As a child I remember, one day while in a bored or distracted state, using my fingers to flatten a single piece of sandwich bread from its thick, porous original form into a hard, thin, dense bread-pancake. While my 7-year-old self marveled at this metamorphosis in bread, as an adult I shudder when considering that soil essentially undergoes the same transformation when it becomes compacted. Just as it’s harder and less enjoyable to sink your teeth into a piece of sandwich bread devoid of air pockets and structural channels, it’s harder to get roots, air, water, and soil dwellers into compacted soil (and probably less enjoyable, too!).

Compacted soils are poorly aggregated. The practices causing compaction may frequently damage aggregation directly, such as through heavy tillage, or contribute to the destruction of aggregates simply through repeated compression. Compaction and size of soil aggregates are inversely correlated: as compaction increases, size of soil aggregates decreases, as the bigger aggregates are broken down into clumps of progressively smaller particles. Less-disturbed soils, such as those in permanent beds or no-till, are less likely to become compacted, in part due to the increase in soil organic matter, as well as because of the decrease in compacting activities.

Organic matter, or all the carbon that remains from anything you added to your soil and didn’t remove, such as through compost applications or cover cropping, plays an amazingly important role here by both stabilizing soil structure (making aggregates stronger) and decreasing the likelihood of compaction. Soils that are high in organic matter are able to better bind into aggregated particles and are less likely overall to become compacted. Soil organic matter content can even be used as a predictor of potential soil compaction.

It’s important to note that very sandy soils present an exception to the aggregation and compaction considerations. While it is possible for them to become compacted, the large size of all the individual sand particles makes it harder for them to get compacted than clay-heavy soils. Similarly, the lack of charged clay particles within sandy soils makes it harder for them to form strong aggregates. Therefore, biological processes are a driving force in the aggregation that does occur in sandy soils. If you’re trying to keep your sandy soils well managed, don’t despair! For sandy soils, the large particle size of each grain of sand creates natural channels and pores within the soil, facilitating both good water infiltration and a low propensity for compaction and thus offering many of the benefits of aggregation without the actual formation of aggregates.

How do you know whether your soil is compacted or aggregated? Compaction is typically measured with a soil penetrometer, a $200-300 probe that can measure the amount of pressure required to penetrate the soil, with greater penetration pressure correlated with increased compaction. Anyone wondering whether their soils are compacted but not wanting to buy a penetrometer can assess compaction by measuring the depth to which a thin, pointed wire or rod can be pushed into the soil before encountering much resistance. Something as simple as a garden flag wire or similar wire of comparable gauge can be used; once the wire bends or is difficult to press in further, you’ve likely encountered a layer of compaction! Or a rock, if you have especially rocky soils, which is why it’s important to try this a few times to get a good average. The goal is to be able to reach a depth of 12” without requiring too much pressure. Try this in several locations that are managed similarly and compare it to other areas with different management or a hedgerow to see how compaction compares between areas.

Although a bit more complicated than the DIY compaction assessment, you can also observe how aggregated your soil is through a slake test. By submerging two clumps of soil in water, the slake test demonstrates the soil’s structural stability and, subsequently, the strength of its aggregates. In order to do the test, you’ll need a spade or shovel for collecting soil samples, two pieces of wire mesh (we recommend ⅛” mesh), two 32oz mason jars or similar (clear plastic is okay), and enough water to fill the jars. The steps below outline how to do a slake test: 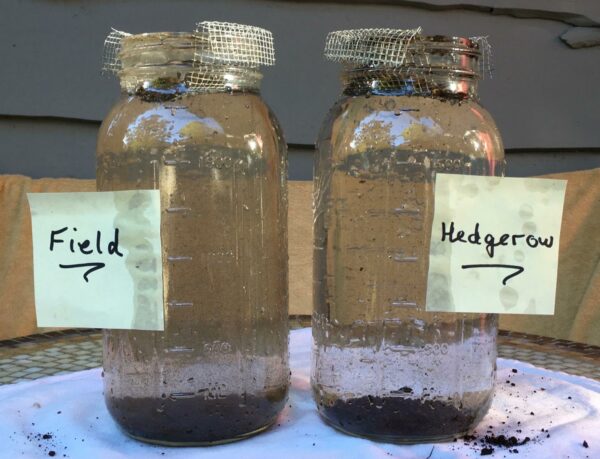 Depending upon how well-aggregated your soil is, you may see differences between the managed and the unmanaged soil. Poorly aggregated soil will filter through the mesh as water infiltrates the pores within the clump, displacing air and causing the clump to disintegrate and the water in the jar to become murky with soil. Soil that is more strongly aggregated will maintain its form and the water will stay clearer – the goal is to have as clear of water as possible! Well-aggregated soil will stay nearly intact with very little change in the water color, demonstrating the ability of the aggregates and the biological glues to hold the soil together even when inundated with water. Water that is dark or murky indicates that the soil is not held together well, suggesting the need for additional organic matter and/or an evaluation of soil tillage and management practices.

If you have tried these DIY tests and are interested in more information about what they mean about your soils, or if you’d like to have a better idea of everything that is going on “down there”, the NOFA/Mass soil technical services team is available to help! We offer a variety of technical services that can help you interpret your soil and what to do with it, ranging from chemical analysis and interpretation, to microbiological assessments to identify the presence of bacteria, fungi, nematodes, and protozoa, to a holistic soil health evaluation of your soil’s physical characteristics. Visit our website, https://www.nofamass.org/nofa-mass-technical-assistance/, to learn more about our available services. If you’re ready to book an assessment, head over to our ordering site at https://www.nofamass.store/book-online, or drop us an email at soilhealth@nofamass.org.

In addition to our testing services, we are also currently running two soil health-related studies: a MDAR-funded Soil Compaction project and a SARE-funded Soil Health project are both entering their second year of study. The MDAR Soil Compaction project is allowing us to quantify the relationship between management practices and compaction using tests similar to the ones described above. The SARE Soil Health project is bringing us to farms throughout the state to perform soil carbon proxy testing, which includes compaction and slake testing as well as a more in-depth assessment of soil aggregation. Soil carbon proxy testing is an expansion of the soil health assessment presently available through our technical services and a great opportunity for farmers who are interested in learning more about their soil. Findings from both projects will allow us to have a greater understanding of the overall condition and health of soils in Massachusetts, and observations of the interrelationships between farm management and the development of healthy, un-compacted soils.

This material is based upon work supported by the National Institute of Food and Agriculture, U.S. Department of Agriculture, through the Northeast Sustainable Agriculture Research and Education Program under subaward number ONE20-378.