Soil Carbon Proxy Testing Can Help You Help Your Soil

Soil Carbon Proxy Testing Can Help You Help Your Soil 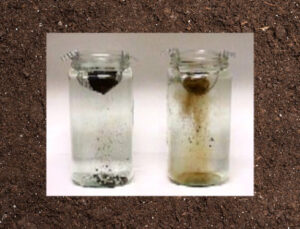 Soil organic matter is essential to healthy soils. Acting as a sort of “control center”, it regulates a soil’s physical, chemical, and biological properties. Every soil starts with a baseline level of organic matter based upon its climate and soil texture which can be increased or decreased depending upon how it’s treated. The baseline nature of the soil’s organic matter can be changed based upon how the soil is nurtured over time.

Derived from other living things, soil organic matter can be added to soils through the introduction of cover crops, plant residues, compost, or mulches. However, it can also be easily lost through intensive farm management practices, including tillage, removing all crop residues, and erosion, which take a lot out of the soil without replacing the nutrients and soil structures that were removed. In general, soil organic matter is directly related to soil health, with higher levels of soil organic matter indirectly resulting in healthier plants and better crop yields. As I explain in my July 2021 NOFA/Mass newsletter article “A Primer on Sustainable Soil Management”,  soil management practices play a critical role in developing soil organic matter and the various components of soil structure essential to soil health and plant vitality. 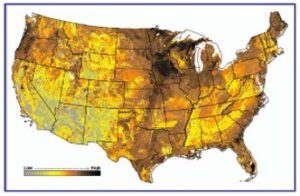 Soil Carbon Proxy Testing uses indicators commonly associated with the presence of carbon to indirectly evaluate the amount of carbon within soils. Similar to how you can know there’s a songbird nearby when you hear its song, even if you haven’t actually seen the bird, there are things you can measure in carbon-rich soil (akin to the bird’s song) even if you haven’t actually measured the carbon itself (akin to seeing the bird). Certain physical, chemical, and biological components of soil, such as soil aggregates and water infiltration rate (physical), active carbon (chemical), and earthworm and root counts (biological), are highly present in soils abundant in carbon and, subsequently, organic matter. By assessing for these components, Soil Carbon Proxy Testing offers a way to quantitatively and qualitatively measure a soil’s organic carbon content, and thus soil organic matter content, through a series of field-based metrics.

The NOFA/Mass Soil Tech Team has been monitoring soil organic carbon levels on Massachusetts farms since its Soil Carbon Proxy Test protocols were first adapted by Jack Kittredge in the mid-2010’s. These low-cost on-farm tests are available to farmers and gardeners interested in knowing the overall health of their soils and hoping to associate management practices with soil organic matter and health. Soils managed to increase organic matter by minimizing or eliminating tillage, maintaining year-round soil cover, incorporating compost or green manures, and intercropping or planting a diversity of crops, are expected to have higher soil organic carbon contents than those that are managed without these proven soil-building practices. 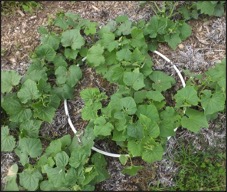 In addition to broadly offering the Soil Carbon Proxy Tests to the Massachusetts farming and gardening community, we have recently been working to expand the breadth of our testing to other northeastern states. In conjunction with funding from the United States Department of Agriculture (USDA), the Sustainable Agriculture Research and Education program (SARE), and the Massachusetts Department of Agricultural Resources (MDAR), we have been both training other NOFA chapters on Soil Carbon Proxy Testing procedures and developing longitudinal studies of soil organic carbon changes for farmers participating in the projects over a span of several years.

The SARE longitudinal study was developed with the goal of demonstrating that farmers can better increase soil carbon once they have had their soil tested and can subsequently work with the results to improve management practices. As a part of the project, the NOFA/Mass Soil Tech Team interprets and reviews Soil Carbon Proxy Test results with the farmers as they work to improve soil health through management changes. Three Northeastern farms: Simple Gifts in Amherst, MA, Grindstone Farm in Pulaski, NY, and Massaro Farm in Woodbridge, CT, have been participating in the multi-year study that started in September 2020. The expectation is that the three partner farms will see the most immediate benefit from their Soil Carbon Proxy Testing results and corresponding management changes.

The SARE project also seeks to improve access to Soil Carbon Proxy Testing by teaching others to become proficient in performing tests. NOFA/Mass Soil Tech Team advisors have trained staff at CT NOFA and NOFA-NY in Soil Carbon Proxy Testing as a part of the project’s efforts to expand the utility of this valuable service. The goal is to increase farmers’ understanding of their soil carbon levels throughout the region, allowing them to implement management changes that can start to have beneficial impacts on their soils and the environment.

Similarly, the USDA-funded NOFA/Mass Conservation Innovation Grant (CIG) project has united 9 northeastern farmers in a learning community to discuss and evaluate no-till management techniques. Soil Carbon Proxy Testing has been performed at the 9 farms since the project’s inception in 2018, establishing a baseline level of soil carbon at each farm as well as annually testing for changes in response to reductions in tillage. This multi-year project concludes this fall. Stay tuned for our findings on the effects of soil management on soil organic carbon at our participating farms. For more information about the CIG project, please visit: https://www.nofamass.org/nofa-conservation-innovation-grant-nrcs-project/.

NOFA/Mass’s newest soil carbon project is the MDAR-funded Compaction Mitigation Grant, which aims to help farmers both detect and alleviate soil compaction, plowpan problems, and other structural issues. This project builds upon Soil Carbon Proxy Testing by specifically emphasizing the physical components of the Test that are not as well understood by farmers. Initial Soil Carbon Proxy Tests were performed at the seven participating farms in Spring 2021 to create a baseline-level assessment of total soil organic carbon; these data will be supplemented with twice-annual soil hardness, infiltration rate, bulk density, and topsoil depth measurements to evaluate management impacts on compaction. Throughout the project, farmers will be participating in a learning cohort to facilitate peer-education on soil management practices and to help encourage management changes that will improve soil health.

The NOFA/Mass Soil Tech Team has recently been revisiting the Soil Carbon Proxy Test protocols and will likely be making modifications in Fall 2021 to reflect a greater emphasis on testing for whole soil health in addition to metrics specifically targeting soil organic carbon. Future offerings will likely include a modified Soil Carbon Proxy Test framed specifically as a holistic Soil Health Assessment, and may possibly include Soil Biological Analysis and Soil Remediation services.

Soil organic matter and organic carbon are created through holistic soil management strategies that encourage year-round soil cover, organic nutrient additions, crop diversity and regular rotations, and biological diversity. The NOFA/Mass Soil Tech Team works to help farmers and gardeners better understand their soil and how management practices impact soil organic matter, organic carbon, and overall soil health. To learn more about scheduling a Soil Carbon Proxy Test through the NOFA/Mass Soil Tech Team, or for information about any of the other soil services we offer, please visit our webpage.

This material is based upon work supported by the National Institute of Food and Agriculture, U.S. Department of Agriculture, through the Northeast Sustainable Agriculture Research and Education program under subaward number ONE20-378.