Picking Up Momentum to Rein in Pesticides in 2021

Picking Up Momentum to Rein in Pesticides in 2021 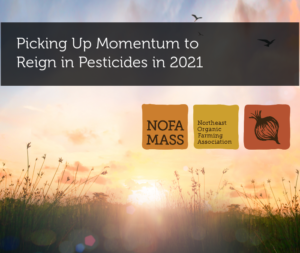 Picking Up Momentum to Reign in Pesticides in 2021
By Marty Dagoberto, NOFA/Mass Policy Director

It goes without saying that 2020 didn’t go as anyone had hoped. That being said, while our legislative efforts on Beacon Hill were undoubtedly impacted by the pandemic, we made significant progress in several regards which are worth celebrating.

We’re heading into the next session with a strong momentum for action on pesticides. We’re picking up where we left off with several pieces of legislation and your help is needed to attract cosponsors in January!

Please read on for details on all of the above. The NOFA/Mass Policy Committee welcomes volunteers and is open to all NOFA/Mass members. Email marty@nofamass.org to join.

Thanks to the leadership of Senator Jo Comerford, the Senate passed the Healthy Soils Bill as an amendment to a “must pass” Economic Development bill after we filed a request on behalf of 37 allied climate, conservation and food system groups. At the time of writing (12/18/20), the bill is still in conference committee. We’re hopeful that our amendment will be retained in the final report and become law with the passing of the Economic Development bill. All we can do now is wait and see. We will update this page as soon as we hear the results.

At the beginning of 2020, the Joint Committee on the Environment, Natural Resources and Agriculture “reported favorably” (passed from their committee) three of our priority pieces of glyphosate-related legislation. This was due in no small part to the outpouring of public support shown at their November 2019 public hearing, and all your calls and emails. Thank you, again, to everyone who made that hearing such a success!

More details on these bills will be found on our Action Page for the 2021-22 session bill introduction process. Click here! – We need your help in calling for cosponsors for these and other bills in January!

As we shared last month, the Department of Agricultural Resources (MDAR) has finally updated its science on neonic pesticides and their literature review is consistent with a number of global studies which have found adverse impacts of neonics on pollinators. The report provides a compelling case for restricting use of neonics – exactly what we’ve been pushing for for years in the form of the Mass. Pollinator Protection Act, H.763. Whether or not regulators take meaningful action based on that science will depend on our continued vigilance and the ongoing support of our legislative allies. (Note: as of the time of writing, 12/18/20, H.763 is still active and has a chance of passing. This hearing was about a regulatory approach toward the same goal, and beyond.)

On December 10th, 2020, MDAR held a (virtual) public hearing necessary to finalize the Department’s literature review on neonics. This hearing had been canceled at the beginning of the pandemic and was not rescheduled until our legislative allies spoke up in October. Our legislative pollinator champion, Rep. Carolyn Dykema, delivered a fierce statement signed by 80 of her legislative colleagues, which included this passage:

“Despite concerns about neonicotinoids being brought to the Department’s attention repeatedly by the Attorney General’s office, legislators and others since 2014, the [Pesticide Board] Subcommittee failed to initiate an independent review or take any consequential action until 2019, when legislatively required to do so. This inability or unwillingness to respond to concerns that clearly fall within its purview raises concerns about whether the Subcommittee is able to fulfill its charge under the law to regulate pesticides.” – Rep. Carolyn Dykema

If your legislator signed Rep. Dykema’s letter to MDAR, please be sure to share with them your personal thanks as a constituent. We appreciate their bold words and encourage bold action to correct the faulty pesticide regulatory process in Massachusetts!

The hearing was very well-attended by over 100 supporters mobilized by our coalition. Frustration with a lack of meaningful action on pesticides was echoed by many of the two dozen advocates who testified at the Department’s hearing.

A screen shot of the neonics virtual hearing. Not quite as exciting as being there in person, but much more convenient!…

I, Policy Director Marty Dagoberto, submitted written testimony on behalf of 55 allied organizations and shared my own remarks (see a video of the oral testimony here.)

“Now that the Department’s assessment of the science aligns with what pollinator protectors have been saying for years, we expect appropriate action to restrict neonics without further delay.” – Martin Dagoberto, NOFA/Mass

I also included an important point highlighting the need for justice for farmers:

“As we phase out the use of toxic pesticides, we must provide for a just transition for all of our farmers. It is not their fault that this economy and corporate manipulation have driven a reliance on toxins to produce our food. We cannot place the burden of this transition on farmers, who can barely make a living. We must provide an off-ramp from toxic agriculture and incentivize practices which Honor Life.” – Martin Dagoberto, NOFA/Mass

In a joint statement signed by representatives of 55 agricultural, environmental, climate and pollinator advocacy groups, farms and businesses, along with several individuals, our coalition is urging the Department to take the following actions in response to the findings of its literature review:

More highlights from oral testimony delivered during the hearing include the following:

“While the legislature and regulatory bodies are often faced with difficult choices and decisions – this is not one of them… The clock is running out, however, and if the Dept. of Ag does not act, the legislature must.” – Deirdre Cummings, MASSPIRG

“It is, indeed, the job of the legislature to file legislation that protects people in this state and protecting the health and well-being of the rivers, the soil, the air – that is our job.” -Rep. Lindsay Sabadosa, pushing back against comments by those who categorically oppose legislative action on pesticides. (The pesticide companies would prefer to see all “regulation” of pesticides contained to the Pesticide Board…)

“It takes significant courage for scientists to publish data that cuts them off from significant funding and turns industrial supporters into powerful enemies; government regulators need similar courage when presented with overwhelming evidence of harm such as your study and many others confirm is caused by the overuse of neonic insecticides. Do your job.” – Dr. Richard Callahan, Director of the Massachusetts Beekeepers Association

“The results of the literature review are resounding: neonicotinoids pose unreasonable adverse effects on pollinators and the environment… Massachusetts cannot afford to wait any longer to limit neonicotinoid use.”  – Colin Antaya, Conservation Law Foundation

“We urge MDAR and the Massachusetts Pesticide Board to finish the job EPA has been unwilling to do – do not repeat its mistakes – protect health and the environment, and restrict the use of neonicotinoids.” – Drew Toher, Beyond Pesticides

By the end of the 2.5 hour hearing, we had demonstrated the breadth and depth of our movement, the industry representatives appeared to be on the defensive, and the Pesticide Board got the message that we will be continuing to engage with this process and expecting action. Thank you to everyone who spoke and attended!

What’s next on neonics restrictions?

We will continue to push for the passage of H.763, which, at the time of writing (12/18/20) still has a chance of passing. We are grateful that at least half of the legislature understands that they can’t wait for the Department to take action on its own.

If any members reading this would like to join NOFA/Mass Policy Committee and/or attend the public meetings of the Pesticide Board Subcommittee, please get in touch with us through our Policy Director at marty[at]nofamass.org. We will notify our members if/when broad grassroots action may be necessary.

With the new legislative session starting in January 2021, we will continue our efforts to move our Commonwealth away from reliance on systemic and toxic biocides like glyphosate and toward organic, life-honoring solutions for landcare and agriculture.

Please use this form now to send a message to legislators, asking them to cosponsor the NOFA/Mass priority pesticide bills by February 5, 2021.